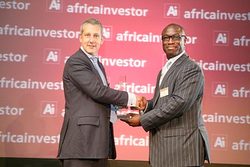 As world population swells and incomes rise the UN believes food production needs to rise 70% by 2050. But fuel and fertliser prices are also rising, land and water is scarce and who knows what damage climate change will wreak?

Africa is reckoned to offer the best opportunities for increasing world output of food. So what can Africa's governments do to further agricultural productivity - and how can the developed world help?

Sir Gordon Conway of Imperial College London is chair of the Montpellier Panel, a group of experts focused on ideas for enabling better European government support of Sub-Saharan African agricultural development. The group has just published a report called 'Opportunities in African Agriculture'.

Sir Gordon is worried by the trend of foreign companies leasing huge tracts of land to develop big modern farms.

Neil Crowder is the chief executive of one of those companies, an investment fund called Chayton Africa. Chayton Africa is developing big farms in Zambia and other African countries.

He tells Justin Rowlatt that farming in Africa can be very profitable - just wait till you hear how much he expects investors will make - but will it also benefit Africans?