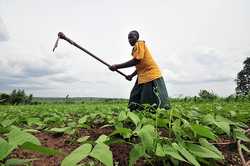 African ministers urged to pursue incentives to ease private investments in agriculture - African Ministers of Finance, Planning and Economic Development, who will be meeting over two days in Addis Ababa, Ethiopia, on Monday, have been implored to take a lead in providing additional incentives to facilitate private sector investments in agriculture, but without undermining national sovereignty in areas such as land and water acquisition.

A report on the implementation of the comprehensive Africa Agriculture Development Programme (CAADP), being reviewed by a committee of African economic, finance and planning experts who are meeting ahead of the ministers, says ministers of finance have a key role in facilitating faster and better implementation of national agriculture and food security investment plans.

The report calls on ministers of finance to initiate and facilitate effective spending instruments like public expenditure reviews, effective monitoring and evaluation systems and regular sectoral reviews and dialogue mechanisms for agriculture and related sectors for better results.

During budget discussions, emphasis needs to be placed on complementarities of different sectors as the only instrument to determine and allocate sector budgets, says the report.

CAADP was endorsed in 2003 and African governments have agreed to increase public investment in agriculture with a minimum of 10 percent of their national budgets and to raise agricultural productivity by at least 6 percent.

The report says “budget process in countries should be used as instruments for better inter-and-intra sectoral coordination and that during budget discussions, emphasis needs to be placed on complementarities of different sectors as the only instrument to determine and allocate sector budgets.'

About 50 African ministers of Finance will be meeting here for a two-day conference whose theme is “Unleashing Africa’s potential as a pole of global growth.”

The ministers will be deliberating on Africa’s role in solving the problem of low global growth, high unemployment and global imbalances.