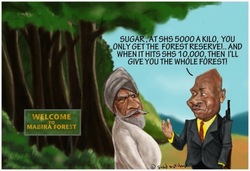 The Ugandan Government attempted to sell Mabira natural forest reserve in central Uganda to foreign investors to establish a sugar cane plantation. The Government’s reason for sacrificing this important ecosystem is the rising price of sugar!

A guest blog from the communications officer at the National Association of Professional Environmentalists (NAPE) in Uganda.

Some foreign investment firms have called it the next ‘golden’ commodity. Many analysts, global human right groups and civil society organizations have called it neocolonialism. If I may be sentimental, I want to call it the new slavery.  But this is a type of slavery of another kind. While in orthodox slavery people were sacrificed to foreigners, in this slavery, land is sacrificed and local ownership is lost along with local sovereignty. The political elite who are facilitating the land grabs want everyone to believe it is development.

In Africa, land is owned communally – according to ethnic/tribal groupings.  A small percentage is owned individually or privately. In Uganda, less than 35% of land is privately owned, with the remaining land held in common.

Most African nations do not have sufficient mechanisms to protect local rights and take care of local interests, livelihoods, and welfare. Insecure local land rights, inaccessible registration procedures, vaguely defined productive use requirements, legislative gaps and other factors all too often undermine the position of local people when they are up against multinational companies working hand-in-glove with the political elite. The people become slaves in their own countries.

Land grabbing is the large-scale purchase or lease of farmland usually to outside interests. It is often described as using only idle, under-utilized and or uncultivated land. In Uganda it is the top leadership that initiates the land grabs for global land thieves. Whole communities are being displaced and scattered.

In Africa, where land grabs are most pronounced today, there is in reality no idle land anywhere. To some extent, there is uncultivated and or underutilized land in some parts of Africa, but this does not justify usurping land rights from the rightful owners at a give-away price or no cost at all to those who want to put the land to a more profitable use. In any case, “putting land to profitable use” frequently translates into destruction of nature and converting semi-wild land into vast monocultures. The trees that are being imposed onto the local landscapes –Pine and Eucalyptus – create biological deserts that ultimately help to extend Sahara Desert southward. These agribusinesses are often high water users, destructive to the soil, and using highly polluting agrichemicals.

Governments have increasingly sought to take over plots of land on behalf of business, using the doctrine of Eminent Domain, or compulsory purchase.  However, under the United Nations human rights system, governments are expected to seek the free prior informed consent of local populations though debates continue over whether “consent” is too high a standard and “consultation” is a more reasonable benchmark.

Sustainable development is not a reality unless it includes respect for human and land rights. Land is central to people’s identity, livelihoods and food security. It is also central to sustainability – be it cultural, economic or social – because it forms the physical basis of sustainability. Unfortunately laws and policies being designed today in Africa in general and Uganda in particular seem to have as a primary goal the stifling of human and land rights in the quest to make it easy to grab land.

Large-scale land acquisitions under plantation agriculture appear to recognize host communities only in the form of semi-skilled class of farm laborers, while others are marginalized or displaced. Sadly, local communities are rarely adequately informed about the land concessions that are made to private companies. Besides, the food grown on such land from Africa does not benefit the hungry and malnourished populations in Africa; it is nearly always for export.

Multinational companies have taken advantage of unclear legal frameworks and community ignorance to easily acquire millions of hectares of land with the backing of some states.  Besides, after acquiring large areas of land, they often enjoy tax exemptions, repatriation of profits; no export restrictions and other subsidies in exchange for the kickbacks they offer.

In Uganda, for example, since the 1990s, government has enabled foreign firms to acquire large areas of natural forests and farm land to foreign investors under the pretest of development. BIDCO Uganda Ltd, a subsidiary of BIDCO Kenya, a Malaysian Company  acquired over 30,000 hectares of natural forest land in Kalangala Islands in Lake Victoria to establish palm oil plantations with financial support from the World Bank.

The project promised jobs to local youth but the jobs have not come. It promised tarmac roads, electricity and health centers but these have not yet been provided. Operations of BIDCO are leading to pollution of water and fisheries by chemical fertilizers; dwindling of common forests on public land accompanied by cultural erosion; food insecurity, spiraling food prices; malnutrition; population displacement and changes to the local climate.. Expansion of BIDCOs plantations will lead to the destruction of the legally recommended 200m buffer zone (i.e. from the shore of Lake Victoria to lowest edge of plantations) and a decline in tourism. Malaria infection is on the rise as forest cover and climate change effects proliferate on the island.

The Ugandan Government has also attempted to sell Mabira natural forest reserve in central Uganda to foreign investors to establish a sugar cane plantation, but have met stiff resistance from the citizens backed by the international community. For now, Ugandans can say they have won that battle but the war is still on. Who knows? The power of money may eventually eat up the forest. Government’s reason for sacrificing this important ecosystem is the rising price of sugar!

The Madhvani Group of Companies (an Indian Company), with backing of government, has recently been given by government over 40,000 hectares of communal land in northern Uganda to establish a sugar cane plantation and build a sugar factory. The Madhvani Group says they want to increase sugar production and address the soaring sugar prices in the country. However there is a thriving school of thought especially among civil society that believes government and Madhvani have entered in secret deals with some foreigners to grow sugar cane for agro-fuels. The affected communities, backed by the area politicians, resisted the land grab and have since dragged the company to the courts of law. Despite all this, land grabbing continues in Uganda.

The power of food security in development and socio-political stability should not be but is being underestimated by governments of Africa. Food security will continue to be used as a political weapon by the land grabbers to hoodwink African governments and their peoples into relinquishing their land rights for peanut payments. This reason has been used in many Africa countries – Gabon, Nigeria, Ghana, Congo, Botswana,  Mozambique, Tanzania, Kenya, Uganda, Ethiopia, Sudan … name it. And the land has gone and gone forever. It is now part of other countries producing food primarily to feed citizens of those countries. What still remains cannot sustain food security!

We know the problem, but what are the solutions?

Individuals and communities have a continuous relationship with the land they live on and benefit from. Some have legal rights, other don’t. After a deal has been struck, some individuals and groups are willing to move, some aren’t; some are willing to negotiate a better price or other terms of resettlement, and some prefer defending their rights using all the means at their disposal. This all depends on how transparent the process has been. Communities need to be involved from the beginning.

All companies have human rights responsibilities and should be aware of inherent risks of being complacent in actions governments take claiming they do so to ensure development, but which instead lead to abuses.  For example, when the state (or its agents) uses force to secure land for public or private use, it is illegitimate and illogical when measured against internationally  guidelines.

Under the United Nations “Protect, Respect, Remedy” framework for business and human rights, all companies have the responsibility to respect human rights. Business interests should not infringe upon the rights of others, and should undertake due diligence before and during any business activity, to ensure that its actions are consistent with its responsibility to respect human rights. Companies must adhere and meet their obligations. This is part of the greater solution to land grabbing:  respect for human rights.