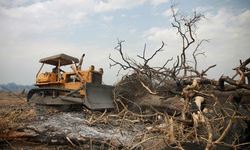 Ethiopia’s government said it plans to clear land and provide infrastructure for investors to accelerate a commercial farming drive in the west of the country, amid opposition to the plans that left 19 people dead.

More than 100,000 hectares (247,105 acres) of land in the Gambella and Benishangul-Gumuz states on the border with Sudan will be targeted in a process managed by the Agriculture Ministry’s Agricultural Investment Support Directorate, its director, Esayas Kebede, said in an interview on March 21.

“The government is taking that responsibility to clear the land and to develop the land and then after to transfer the land with a value addition,” he said in the capital, Addis Ababa. The government will provide infrastructure including irrigation, electricity, telephones and drinking water, he said.

Ethiopia, which according to the London-based Overseas Development Institute is one of the world’s top five recipients of food aid, has leased out 400,000 hectares acres of land over the past four years to investors including Saudi Star Agricultural Development Plc to grow crops partly for export. The government may increase a so-called land bank that sets aside 3.6 million hectares of Ethiopia’s total 110.4 million hectares for commercialization, Esayas said.

Ethiopia’s land-lease program has led to “human rights violations and the forced relocation of over a million Ethiopians,” in Gambella and the nation’s southern region, the California-based advocacy group, Oakland Institute, said in an e-mailed statement on March 19. The government denies human- rights violations and any connection between investment and a resettlement program that it says is voluntary.

Agro-industrialization in Africa’s second-most populous nation will benefit the Anuak and Nuer ethnic groups that live in Gambella, Shiferaw said on March 9. “In the coming 30 to 40 years they will join what the country aspires to be and that is a middle-income country,” he said in an interview in the capital. Ethiopia’s has a population of 82.9 million people.

The directorate is clearing the land and providing infrastructure because investors aren’t progressing as quickly as the government would like, said Esayas. Lessees are clearing land without having a “design” for farms, he said.

Increasing numbers of U.S. and European companies are interested in renting plots, according to Esayas. “Monthly, at least 400 local and foreign investors are coming to get information,” he said.

In Gambella, 228,000 hectares have been leased and another 877,000 earmarked for investors, he said. The total area to be farmed is 42 percent of region. In Benishangul-Gumuz, the directorate has transferred 100,000 hectares and is marketing a further 981,000 hectares, which is equivalent to about one-fifth of the state.

Bangalore, India-based Karuturi Global Ltd. (KARG), the world’s largest rose grower, has developed about one-tenth of its Gambella plot of 100,000 hectares in around three years, said Esayas. Karuturi is paying 20 birr ($1.15) a year per hectare for the land, according to its agreement with the government.

Under-performing farmers will initially not be punished, said Esayas. “As a government we need the development therefore we should support them,” he said.

Saudi Star, which is owned by Ethiopian-born Saudi billionaire Mohammed al-Amoudi, said last month it wants to add another 290,000 hectares to the 10,000 hectares it intends to grow rice on in Gambella largely for export to Saudi Arabia.

“We need to see the development performance” before Saudi Star is given more land, Esayas said.

An escalation of the land program will “eventually result in the government having to face its responsibility for the human-rights violations caused by so-called development schemes,” said Oakland’s Executive Director Anuradha Mittal in an e-mailed response to questions yesterday. “In the meanwhile, pressure on international donors to stop aid to the government of Ethiopia will gain further strength.”

To contact the reporter on this story: William Davison in Addis Ababa via Nairobi at [email protected]

To contact the editor responsible for this story: Paul Richardson in Nairobi at [email protected]