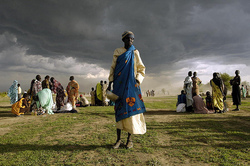 Citadel is investing about $30 million to produce staples such as maize, sorghum and sunflower on 40,000 acres in the oil-producing Unity state bordering South Kordofan. (Photo: UNphoto/Tim McKulka)

A unit of Egyptian private equity firm Citadel Capital plans to cultivate up to 40,000 acres of farmland in South Sudan to sell staple foods such as maize in the newly-independent nation, an executive said on Tuesday.

South Sudan seceded from Sudan in July under a peace agreement that ended decades of civil war with Khartoum, but the new nation is struggling with food shortages and widespread tribal and rebel violence.

The United Nations warns that around a third of the country's roughly 8 million people will need food assistance this year after bad weather and violence hit farming.

The young nation, one of the least developed in the world, also needs to cope with an influx of more than 80,000 refugees from Sudan's South Kordofan and Blue Nile states, where the army is fighting rebels.

'We have so far 4,000 acres and we will be planting this year, primarily maize with some sorghum and sunflowers,' said Schuurs, managing director of Concord Agriculture, a fully-owned Citadel unit.

'Our focus is food security in South Sudan... we will be supplying the local markets,' he said on the sidelines of an investment conference in Juba. 'We will plant the crop in June.'

The firm has leased land from Unity state to be developed with the help of local farmers who it trains and equips with heavy machinery.

Schuurs said Citadel plans to add between 6,000 and 8,000 acres every year to reach between 30,000 and 40,000 acres within three to five years, when the firm expects to make its first profit from the project. Total production would be around 67,000 tonnes at the start.

'There is a food deficit for hundreds of thousands (of tonnes),' he said, adding that the United Nations, South Sudan's army and local merchants would be customers.

A camp with refugees from South Kordofan is located close to Citadel's farming land. 'They will need to be fed,' Schuurs said.

Citadel expects a return of 15 to 20 per cent from the project, which it plans to reinvest in the Unity state farmland.

Like other investors, Concord is facing a long list of challenges doing business in South Sudan, which is struggling to set up a functioning administration.

The biggest headache is importing farming machinery to the landlocked nation from the Kenyan port of Mombasa along poor roads in Kenya and Uganda. Few paved roads exist in South Sudan outside the capital Juba.

It not only takes weeks to get the machinery but local officials frequently try to impose unexpected duties on the imports, Schuurs said.

'There are always challenges. At the border between Uganda and South Sudan there is a problem at the moment,' he said.

Promised by the government in Juba to be exempted from customs in the first 10 years of the project, Citadel now faces demands from South Sudan border officials.

He said customs officials have become much stricter since a row between Sudan and South Sudan over oil payments escalated.

South Sudan needs to export its crude via Sudanese pipelines to a Red Sea port but has been unable to agree on a fee with Khartoum.

In January Juba shut down its entire oil production of 350,000 barrels a day in a protest at Sudan taking some oil for what it called unpaid transit fees. Since then officials have been scrambling to find alternative sources of revenue.

'There is no revenue from oil and all of a sudden they are looking for ways to generate revenues,' Schuurs said. 'The easiest way to generate money is to put up a road block and ask for a kind of a fine for a passing truck or car.'