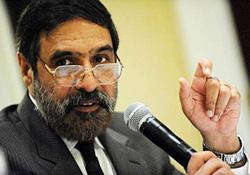 New Delhi — About 900 million hectares of arable land are not properly utilised for agriculture in Africa's rich soil, Indian Minister of Industry, Commerce and Textile, Mr Anand Sharma has said.

Speaking at the opening of the 8th India Africa project partnership yesterday, Sharma said beside the unused land, majority of the people in the continent are young and energetic and capable of using the land to better the economy.

"At the moment, more than half of the world economic output is from developing countries with Asia alone contributing almost 50 percent," said Sharma.

Also according to him, the recent partnership initiative is seriously working, adding that a lot of private and public institutions from India are in various African countries helping them to build infrastructure and develop institutional capacities.

He said India considers agriculture very important because without food security any other plan is not workable.

"With 1.2 billion population, we realised there is no country in the world that has enough to feed us, that is why we have to do it ourselves. So also Africa with growing population getting to 900 million people but with greater advantage of mass land more than that of India can do better to become the food basket of the world," Sharma said.

Vice President of Zimbabwe, Mrs Joice Mujuru, said the partnership between the two continents is the one that needs to be pursued vigorously.

She said the leaders in Africa are determined to see that the relationship grows in a win-win scenario.

President of the confederation of Indian Industries, Mr B Muthuraman said in his opening remark that Africa will be the next manufacturing hub of the world by 2030.