Qatar vows to invest in Bulgaria 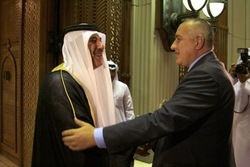 Qatar will invest in three sectors in Bulgaria – tourism, infrastructure, and farming, according to Prime Minister, Boyko Borisov.

The PM is on an official three-day visit to Qatar. The delegation includes 7 ministers from the cabinet – of Interior, Tsvetan Tsvetanov, of Foreign Affairs, Nikolay Mladenov, of Regional Development, Lilyana Pavlova, of Defense, Anyu Angelov, of Agriculture, Miroslav Naydenov, of Transport, Ivaylo Moskovski, and of Economy and Energy, Traicho Traikov, and the Mayor of Sofia, Yordanka Fandakova.

The Bulgarian Head of State stressed the talk had been very important for the future of bilateral relations. He announced that the two have agreed that Arab companies will begin investing in Bulgaria as early as 2012 and thanked Doha for the decision, coming on the backdrop of a global financial and economic crisis.

According to Borisov, during the meeting, Bulgaria had proposed to include Qatari investments in several infrastructure projects such as the rebuilding, repairing, and reopening of the airport in the Black Sea town of Balchik and the construction of the "Cherno More" (Black Sea) highway between the coastal cities of Varna and Burgas.

Other investment opportunities, outlined at the meeting, had included farming and SPA tourism.

Bulgaria's PM further informed that the two countries are in agreement about foreign policies and have joint positions on their desire to stop the bloodshed in Syria and help its people.

This is Borisov's second visit to Qatar, the country with the largest Gross Domestic Product, GDP, in the world, in the last two years. On Wednesday, he will meet the ruling Emir of Qatar Sheikh Hamad bin Khalifa Al Thani. After that, the PMs of the two countries will open the Bulgarian-Qatari business forum with the participation of 103 Bulgarian companies from sectors such as food manufacturing, tourism, construction, real estate, and pharmacy.