Chemicals are used for economic terrorism amidst land conflicts in Uganda 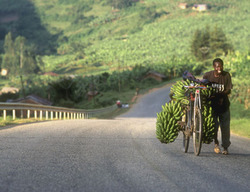 by the Executive Director of ADRICA-NET

Land conflict is one of the major challenges facing humanity globally. This is most complicated in the countries like Uganda where there are constrained legislations, institutions and political will to handle matters relating to land.

In all parts of the country, rural or urban the problem is rampant. The most vulnerable are the poor, who are voiceless. The threat of eviction is eminent in all corners of the country. This has resulted into disturbance on the peoples' livelihoods. In the past the use of physical destruction of crops especially using bulldozers and earth moving equipment has been the mode of inflicting suffering on the people to force them into vacating the land.

However, soficiscation and the application of chemicals have been advanced in this crime against humanity in rural areas. These non selective chemicals are massively used to spray the agricultural fields thus killing them. This causes environmental pollution. Consequently the ecological genocide. This has greatly contributed to economic terrorism and the associated mass suffering of the victims.

Surprisingly these acts are always committed by the so called wealthy people who are in most cases heavy weights in the ruling government such as ministers or army generals and senior officers. It has further been cited that the rather traditionally "morally upright" people especially in the civil society organisations have engaged themselves in these heinous crimes. Further still, most disturbing theses fellows have used the donor funds to finance such crimes.

As you read this article members of Kyagaju Cooperative Society in Kyagaju village Sheema District Western Uganda are crying foul. Chemicals have been used for economic terrorism to shatter the land interests of these poor peasant farmers. This has been inflicted on them by the directors of Integrated Community Based Initiatives, a local NGO/charity that heavily receives funding from America basically through PEPFAR, USAID and CDC. This funding has not only sponsored economic terrorism but rather has even been used to fuel corruption. Bribing police and magistrates in courts of law to frustrate thriving of justice, rendering the area stateless and hiring macherneries to inflict bodily harm on the innocent citizens is what the American dollars is doing for residents of Kyagaju village. It has caused a sustainability problem. This must stop.

In the morning of 7th June, the police of Kabwohe with the District Police Commander (DPC) Sheema arrested and detained the Gombolora Internal Security Officer (GISO) of Kagango Sub County. The detained GISO was charged by police of malicious damage and inciting violence. Yet on the fateful night when the alleged crops were destroyed he was away.

Ironically when the police sniffer dogs were brought in, the dog picked the pangas that were used to cut the banana plantation from the houses of the people who were accomplices in the chemical terrorism. The police never gave it a clear attention as the dogs were picking the pangas from the same people who were complaining that their plantations had been cut by society members. The police wanted to incriminate the area LCI Chairperson to be responsible for this crime. This was just cover-up and a deliberate attempt to jail the LCI Chairperson who doubles as the Kyagaju cooperative farmers’ society. The said chairperson has petitioned the Inspector General of Police (IGP) over this matter, but up to now there is no serious intervention. They are doing all this to hinder proper investigations into their chemical attacks.

However, it has come to be known that Aaron Mutambi, has been telling some residents of Kyagaju and Kabwohe Township that he will do all that is possible to disorganise the GISO. He accuses the GISO for helping the police to arrest him. Should the GISO ignore his duties because of these thugs?

Furthermore, in the afternoon of June 28th 2011, the Resident District Commissioner (RDC), District Internal Security Officer (DISO) and district Police Commander (DPC) Sheema District convened a meeting in the area at St. John Kyagaju Church of Uganda. The meeting was organised in the area however, the following were observed;

The RDC told the people that if they allow to give part of the land to the grabbers who destroyed crops, that he can immediately order for the release of the area GISO, Chairperson Kyagaju Central LC1 Mr. Tangare and the son of the society chairperson one David.

Such utterances are enough evidence to show that the mentioned individuals are being illegally imprisoned and all cases put against them are mare concoction.

The RDC ordered for immediate stop of any activity on the disputed land. Well aware that the community graze all their animals such as goats, sheep, cattle and also use the land as sources of fire wood and also have some few surviving gardens where they are getting food for survival.

Community (society) members have vowed to continue using the land as the utterances and declarations by the RDC are un fair and illegal. This is a pointer that they have failed to amicably resolve the problems. The incident is rather exposing themselves how their integrity is bursting at the whims of corruption.

The RDC’s intimidation tactics will not work. The society has over the years gained resilience. Since the members legally acquired the land cannot allow it to be illegally through corrupt means given away.

These individuals are determined to spread economic terrorism make the place (Kyagaju) un controllable as they are targeting village leadership and intimidating professional security officers.

All these crimes are being committed when the central police and its land protection unit is watching. My visit to the police CPS revealed how much the poor will continue to suffer. The officers almost have spent over 6o days not going to investigate the matter. Guess what, the excuse is lack of fuel. The matter has been denied a well composed investigation team to have the culprits arrested and justice take course.

America, where are you? Why don’t you follow up these criminals who are misusing your hard earned tax payers’ money to shatter the livelihoods of the innocent vulnerable communities?

These criminals should even be tried by The Hague based ICC. Deny them visas to your country, carryout moral and integrity check. I assure you their character is wanting.

It will be dangerous if such crimes are not checked. The only way to do this is to intervene and stop funding these thugs who are terrorising the vulnerable poor people. Security agencies should be aware of this new trend of terrorism that directly crumbles people’s livelihoods.

At Africa Anti Corruption and Drugs Research Initiatives Network (ADRICA-NET) we shall not rest until, these crimes against humanity are totally stopped. We shall continue advocating for the voiceless poor and denouncing corruption.

The writer is the Executive Director of ADRICA-NET and tireless advocate of an equal and safer world.