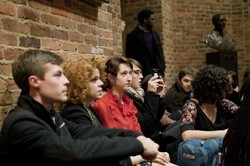 Vanderbilt students and faculty Wednesday afternoon staged a teach-in in the lobby of Kirkland Hall to voice disapproval of the university's investment practices, specifically claims that Vanderbilt investments in African land have negatively impacted local communities.

Around 40 to 50 students and faculty attended the event organized by the Responsible Endowment Coalition of the Vanderbilt Students of Nonviolence, a student-run group lobbying administration officials to divest from EmVest, an investment company accused of exploitive land grabs in Mozambique.

Students at the teach-in voiced concerns over the lack of transparency and accountability in the investment process, as well the lack of institutional guidelines for ethical investment.

"We have no moral code for where we put our money, and that is urgent to change," said graduate student Tristan Call.

After introductions where students voiced their concerns over university policy, Vanderbilt Professor of Philosophy Dr. Lucius Outlaw gave a short lecture in which he encouraged students to try to improve the university rather than attack it.

"Take on the institution," Outlaw said, "but as an act of love."

Outlaw also encouraged students to focus on the institution rather than the individual investments.

"I'm less concerned about the issue than about how we deal with such issues," Outlaw said. "It will not be the only such issue."

The Vanderbilt Campaign for Fair Food, which was also affiliated with the teach-in, has been protesting the university's investment with EmVest since it was reported in the Guardian on June 8, 2011. EmVest's website claims one of its goals is "to provide food security to communities, regions and countries, in a world where food shortages are looming," but the Vanderbilt Campaign for Fair Food states that the opposite is happening, and in fact EmVest is pushing subsistence farmers off their land in order to grow crops for export to more developed nations.

In a report drafted on Jan. 13, 2012, sophomore Zach Blume wrote, "most of the land taken over by these institutions tends to be already proven to be arable - e.g., being used for subsistence farming by a previous community."

Blume was present at the teach-in and presented evidence in the form of satellite imagery, apparently showing that small farms had been present on land in Matuba, Mozambique, that EmVest has bought and turned into a large, monoculture agricultural development.

In a statement provided by Vanderbilt Public Affairs officer James Patterson, the university denied the claims made against its investments.

The statement also points to the Faculty Senate investigation that concluded the investments in Africa were both beneficial to the university and to the local populations. The Faculty Senate report has not been made public, but has been scrutinized by multiple student and faculty members.

Students present expressed their desire to see the report of the Faculty Senate investigation into the investments, as well as more access to members of the administration.

While divestment from EmVest was a key goal of the students, they all agreed that institutional reform and greater transparency are necessary for future Vanderbilt investments. Blume said that in the past, Vanderbilt was much more forthcoming with its investment information.

"There was a transparency that existed then that is unimaginable now," Blume said.

This issue, as well as many others, was raised in a letter to Chancellor Nick Zeppos that was read aloud at the end of the meeting. The letter called for immediate divestment from EmVest, the creation of ethical and moral guidelines for investment of the University's endowment, and greater transparency from the administration. The students were assured that the letter would be passed on to Chancellor Zeppos.

The students involved appeared very positive afterwards about the teach-in.

Though the teach-in had been kept secret due to fears that the administration would bar the students from entering Kirkland, the demonstration passed without incident.