AGCO Executive: China investments will pay off in Africa 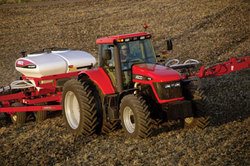 It's likely that the Chinese investments will put AGCO in a better position when the Chinese government looks to buy equipment to use on its African farms, says AGCO exec Hubertus Muhlhauser, who is based in Switzerland.

China is a long way from Africa, but Georgia-based tractor maker AGCO Corp. is betting that investing up to $150 million in two Chinese factories will pay dividends on the continent.

In a "new colonization," China is buying up huge tracts of land across Africa that will mainly grow food for export back to China, Hubertus Muhlhauser, AGCO's general manager of Eastern Europe and Asia, told GlobalAtlanta in an interview in Changzhou, China.

The country of 1.3 billion people has 20 percent of the world's population but only 10 percent of its arable land, and the African farms are a part of China's plan to lessen its dependence on food imports, he said.

Many Americans, now largely detached from the places where their food is grown, have never heard of AGCO or its best-known tractor brand, Massey Ferguson.

That's not the case in Africa.

"We are a leader in Africa. Interestingly enough, in Africa in most languages there, 'Massey' stands synonymous with 'tractors,'" Mr. Muhlhauser said.

AGCO is investing in China mainly for its domestic market. In Changzhou, the company is spending $50 million to build a factory that will produce low-horsepower tractors, engines and other equipment. The goal over the next five years is to ramp up production to 20,000 units from 5,000 initially while making Changzhou a hub where AGCO can inspect parts from Chinese and Indian suppliers. The eventual investment there could reach $100 million.

In the northern province of Heilongjiang, AGCO plans to spend up to $50 million to build an assembly plant for high-horsepower tractors to work large state-owned farms.

It's likely that the Chinese investments will put AGCO in a better position when the Chinese government looks to buy equipment to use on its African farms, said Mr. Muhlhauser, who is based in Switzerland.

"The question is are the Chinese going to favor companies that have investments in China, i.e. will the Chinese government purchase goods in China to be used on their farmland in Africa?" he said. "We have seen a few tenders, yes, definitely. Is this becoming a trend? Most likely, and this will be a nice add-on to the business case that we are running here."

GlobalAtlanta interviewed Mr. Muhlhauser after he spoke at a celebration highlighting investments in the Wujin Hi-Tech Industrial Zone in Changzhou.