Saudi Star among firms behind thousands of forced relocations in Ethiopia 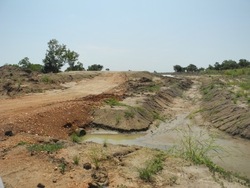 Last week BBC News reported that 70,000 indigenous people have been forced to relocate in the western Gambella region of Ethiopia to new villages that lack adequate resources for their survival. The land has been signed over to foreign investors, including Saudi Star Agriculture Development Plc, a company owned by Saudi-Ethiopian billionaire Mohammed Al Amoudi.

Felix Horne of the Oakland Institute recently authored Understanding Land Investment Deals in Africa - a succinct analysis of the perils of land grabs in Ethiopia. He told Green Prophet that Saudi Star has begun rice cultivation on 10,000ha of land in Gambella and a 10,000ha irrigation project along the already-compromised Alwero River. Only grain that does not meet export requirements will be sold locally.

The BBC reports, “The government in Addis Ababa has said in the past that all the moves are voluntary, the new villages will have adequate infrastructure and everyone who moves will be given assistance to help their transition to a new livelihood.”

Land grabs have also been defended under the pretext that arable land is “unused,” that Environmental Impact Assessments would be required, and that local communities would benefit from foreign investment.

But the Oakland Institute and Human Rights Watch warn that what is actually happening is very different than government claims. To date, no mechanism to improve food security for Ethiopians has been implemented, contracts between investors and the Ethiopian government provide incentives to export food instead of feeding locals, and not a single government official or investor has been able to provide an Environmental Impact Assessment. 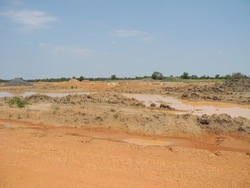 “Several small villages (including Oriedhe and Oridge) within the Saudi Star lease area have been relocated across the Alwero river to Pokedi as part of the villagization program currently underway in Gambella,” OI reports, adding that ”Villagers often used the now-cleared forest in the Saudi lease area during times of food insecurity for gathering food, fuelwood, and medicines.”

American resident Magn Nyang told the BBC that his mother was forcibly re-settled from a village close to Gambella town to a camp. ”When the investors came in they took over the land and they [the villagers] were kicked out,” he said.

The army beat another man with sticks and the butt of a rifle when he refused to leave. He later died, and his family blames the violent beating he received.

Although Saudi Star has admitted that the Alwero River can only provide irrigation for 1,800 ha of rice, 30 kilometers of irrigation channels are currently being built and villagers worry about how they will feed their children.

Humans and animals are losing their land

The company is also infringing on land perceived to be a part of the Gambella National Park. The Ethiopian Wildlife Conservation Authority (EWCA), according to OI, estimates that 438,000 ha of land have been leased to various investors in the vicinity of the park, all without Environmental Impact Assessments.

Saudi Star’s owner Sheikh Mohammed Hussein Ali Al Amoudi is listed by Forbes as the 63rd wealthiest person on earth. He is also the richest person in Ethiopia, where at least 39% of the population lives below the poverty line, and the second richest Saudi citizen in the world.

Only rice that does not grow longer than 7mm will be sold locally, while the rest will be exported – with Saudi Arabia expected to be a huge benefactor, according to Bloomberg News. Eventually, Saudi Star hopes to lease up to 500,000 ha of Ethiopian land.

Land grabs in Ethiopia are well underway, and given lack of genuine government oversight comprise nothing less than a humanitarian disaster.