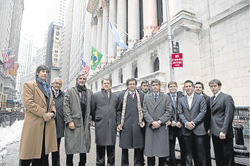 BUENOS AIRES–Argentina has joined a handful of other big farming nations such as Brazil that have taken steps to limit foreign ownership of what their governments consider precious resources: farmland.

Argentina is blessed with vast tracks of arable land that have allowed the South American nation to become the top global exporter of soymeal and soyoil, No. 2 in corn, and third in soybean exports.

The abundance of land coupled with high prices for farm products has fueled a buying spree by U.S., Chinese and Saudi Arabian companies.

But fearing that her country might lose control of its fields, leftist President Cristina Kirchner used her majority in Congress to pass legislation that could put an end to the land grab by foreign investors. The Senate approved the bill late Thursday night by an overwhelming majority of 62-1.

"This is the first time that Argentina takes this stance related to its sovereignty," said Maria Graciela De La Rosa, president of the Senate agriculture commission, during the debate.

The legislation, which now goes to Kirchner to be signed into law, caps ownership by a foreign individual or company at 1,000 hectares (2,470 acres). Existing holdings are exempt from the limits.

Also, no more than 15% of all the country's farmland can be in foreign hands, of which up to 30% can be owned by people or companies from the same nation.

About 7% of Argentina's productive farmland, some 20 million hectares, is already in foreign hands, according to the Argentine Agrarian Federation, an influential farm group that represents small-scale farmers.

Deutsche Bank analysts, in a report Friday, said even more–as much as 10%–of Argentina's land is already foreign owned.

However, the true extent of foreign holdings won't be clear until a survey of land ownership mandated by the new law is completed.

Most farming is still driven by local players and "the law shouldn't have a significant impact on the liquidity of the land market," Deutsche Bank said.

The almost-certain approval of the land bill and Argentina's notoriously uncertain regulatory environment didn't stop Almarai Co., the Middle East's top dairy producer, from paying $85 million this week for local operator Fondomonte to lock in feed supply for its cattle and poultry operations.

With that purchase, the Saudi Arabian company will own and operate three farms in Argentina, covering more than 12,000 hectares and producing barley, maize, soybean, wheat, sorghum and sunflower, according to the company's website.

However, the new law will stop new purchases by large regional farming companies such as New York-listed Adecoagro SA, which owns more than 295,000 hectares of farmland in Argentina, Brazil and Uruguay. The company said it produces more than one million metric tons of corn, wheat, soybeans, rice, dairy products, sugar, ethanol and electricity a year.

While Adecoagro won't be able to snap up more fields in Argentina, more than half of the company's 255,000 hectares in Argentina are still being developed and will continue to increase in value, said Deutsche Bank, which confirmed its buy rating on the stock.