by Rhett Butler and Jeremy Hance 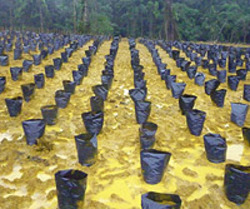 Herakles Farms is planning to cultivate a 60,000 hectares plantation in Cameroon.The 99-year lease granted to the firm by the Cameroonian government is adjacent to several important reserves. (Photo : SAVE Wildlife Conservation Fund).
Industrial palm oil production is coming to Africa, its ancestral  home. The world’s most productive oil seed has been a boon to Asian economies, but the looming arrival of large-scale plantations in Africa is raising fears that some of the same issues plaguing Malaysia, Indonesia, and other leading producers — deforestation, greenhouse gas emissions, biodiversity loss, conflicts with local people, and poor working conditions — could befall one of the world’s most destitute regions.

One of the biggest palm oil projects in Africa is being developed by Herakles Farms, a New York-based agricultural firm that is planning to cultivate a 60,000-hectare (148,000-acre) plantation in Cameroon. The problem is that Herakles’ proposed plantation lies in the middle of one of Africa’s most biodiverse — and threatened — landscapes. The 99-year lease granted to the firm by the Cameroonian government is adjacent to several important reserves, including world-renowned Korup National Park, and is set to replace forests and small farms. Environmental groups, led by SAVE Wildlife Conservation Fund of Germany, warn that the plantation will destroy rainforest and disrupt the lives of local people.

Given the environmental importance of the site of the proposed Herakles plantation, conservationists are asking, why there? Considering that Africa has more than 400 million hectares of degraded forest land available for development, why not choose an area where the forest is already gone? “Given the versatility of oil palm and so much degraded, deforested land across the tropics, surely there are better places to make this kind of investment,” said Nigel Sizer, director of the World Resources Institute’s (WRI) Global Forests Initiative, who met with Herakles officials to express his concerns.

But the company seems determined to move ahead with the project in its current location, saying the plantation will provide economic development for the region while inflicting minimal environmental harm. Herakles vows to abide by strict environmental and social standards and to bring jobs and opportunity to a part of the world that desperately needs both: Forty percent of Cameroonians live on the equivalent of less than a dollar a day, and underemployment rates top 75 percent.

In fact, Herakles claims its commitment goes beyond providing employment. The firm has created the non-profit organization, All for Africa, to fund social ventures across the continent with profits from its palm oil operations in Cameroon. But conservationists view this charity through a different lens, seeing it as a vehicle for marketing a controversial project and downplaying environmental and social concerns.

The final hurdle Herakles faces is winning environmental approval from the Cameroonian government. Bruce Wrobel, president & CEO of Herakles Capital, said, “There isn’t a question of it going forward, more of what the exact [total] area will be.”

But more than 80 conservation and civil society organizations are opposing the project in its current form, hoping that their opposition will scare away the investors that Herakles needs to fund its project. “The challenge Herakles now faces is where to raise the $300 million or more to implement the plan,” said WRI’s Sizer. “Many potential investors will shy away from a project that involves reputational risks from forest loss and complicated negotiations with local communities.”


The plantation site sits amid four protected areas, including Korup National Park, Rumpi Hills Forest Reserve, Bakossi National Park, and Banyang Mbo Wildlife Sanctuary. Korup itself is home to more than 600 species of trees, nearly 200 species of reptiles and amphibians, an estimated 1,000 butterfly species, 400 bird species, and 160 mammal species, including one of the richest assemblages of primates in the world. Korup contains 14 different types of primates, including such threatened or endangered species as red-eared guenon, Preuss’s red colobus, the drill, and the Nigeria-Cameroon chimpanzee, the most imperiled of the world's chimpanzee subspecies. Leopards, bushpigs, duikers, brush-tailed porcupines, and forest buffalo roam the lowland rainforest as well.

Environmentalists contend that the proposed plantation will likely disrupt important wildlife migration routes and isolate wildlife populations by preventing them from dispersing and intermingling. The plantation, which is half the size of Korup Park, could create a barrier for forest elephants traveling between Korup and Rumpi.

Environmental groups also argue that the plantation will hurt wildlife by worsening the already problematic bushmeat trade. Such concern is not without precedent. In Southeast Asian palm oil plantations, some workers — who often live below the poverty line — illegally get their dinner through wildlife snares and hunting.

In fact, a conservation scientist with detailed knowledge of the area and the oil palm industry said that given the draw of jobs, people would migrate to the region, making it only a matter of time before wildlife suffered under a rising human population.

“Animals will be wiped out and the current conservation infrastructure is ill-equipped to do anything about it,” said the scientist, who requested anonymity. “So, unless Herakles plans on hiring and training hundreds of ecoguards in each protected area, funding environmental education programs throughout the plantation area, restricting immigration into the area, and providing non-bushmeat alternative protein to its employees and surrounding residents, Korup is in big trouble.”

Herakles counters by saying it will abide by the Roundtable on Sustainable Palm Oil (RSPO) guidelines, which include not cutting down primary forest. Herakles Farms is a subsidiary of Herakles Capital, a New York-based venture finance firm that specializes in investments in developing countries. In 2009, Herakles Farms acquired SG Sustainable Oils Cooperatif (SGSO) and its proposed Cameroon palm oil project from Sithe Global. Sithe Global is owned by the Blackstone Group L.P., a major, New York-based private equity and asset management company. Although Blackstone has been targeted by some environmental campaigners, Peter Rose, Blackstone’s senior managing director for public affairs, said that Blackstone has “no connection to this [Cameroon] project, directly or indirectly.”

Already Herakles has foresworn development of 10,000 hectares of its initial 83,000-hectare concession. The company says the loss of forest will be “primarily degraded secondary forest” and that the area to be cultivated was heavily logged less than 20 years ago. Herakles also says it is considering creating wildlife corridors and is discussing that prospect with experts.

As for worsening the bushmeat trade, Wrobel maintains the plantation will remedy the problem instead of exacerbating it. “We believe that the opportunity to have cash incomes for the first time in this area will actually have quite a significant impact in terms of reducing illegal bushmeat hunting and logging,” said Wrobel.

Herakles has already signed the lease granting it use of the land for 50 cents to $1 per hectare annually, and some preliminary forest clearing has begun. “Many people in these villages are against this development because it would mean losing their forests, and either being surrounded by oil palms or being forced to relocate,” said a press release from Save Wildlife Conservation Fund “Most of these villagers rely heavily on farming to feed their families and earn an income. They also rely heavily on the non-timber forest products.”

Letters from impacted communities express concern and, in some cases, outright opposition to the plantations, accusing the company of already illegally clearing forests. But the letters aren’t necessarily supportive of conservation groups, either. In one, local people bemoan that they have already lost nearly half a million hectares to protected areas and ask, if the deal with Herakles proceeds, “What quantity of land will then be left for our prosperity?”

In August, a local organization, the Bima Cultural Union for Development (BICUD), drew up a list of demands, including a reduction in the length of the lease to 30 years, renewable once; a massive reduction in the size of the plantation; and more engagement with local chiefs. BICUD said its members didn’t want to give up any more land to “protected areas, council forests, other villages, or an American company.”

For its part, Herakles, says the plantation will not result in any local people being relocated and will lift many in the region out of poverty by creating 9,000 jobs.

“We believe that developing a sustainable and responsible palm oil industry in Africa is key to food security on the continent,” said Wrobel. “We expect that when complete we’ll move half of families in the economic impact area into the middle class. We have lofty social ambitions there.”

A key vehicle for those ambitions is the charity created by Herakles, All for Africa, which will own 7,000 hectares of palm oil plantations. Wrobel is also the CEO of All for Africa, which the company says will use proceeds from its portion of the plantation to support a number of African non-profits, from those focusing on water and sanitation to education and community health. The charity, which has received accolades from former U.S. President Bill Clinton, says it is hoping to plant a million palm oil trees to raise $750 million for the initiative.

The charity allows donors to buy a “tree of the month.” But it appears that every month’s tree is oil palm, an example, some conservationists say, that All for Africa’s plan is misguided at best, disingenuous at worst. To date, the organization says that people have donated 32,350 trees.

“All for Africa likely has the best of intentions,” said William Laurance, a tropical forest scientist with James Cook University who has worked in Cameroon. “But how would donors respond to know a forest will be cut down to plant their tree?”