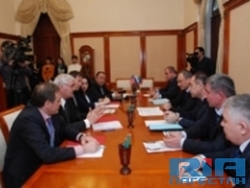 Makhachkala, April 5, 2011. On April 4 in Makhachkala, Dagestani Head Magomedsalam Magomedov met with the president of the international company “Amity Tehnology LLC” (USA) Howard Dahl and signed a Memorandum on joint agribusiness projects implementation in the country. The event was attended by the prime-minister RD Magomed Abdullaev and his deputies - Mukhtar Majidov and Murat Shikhsaidov, the minister of agriculture RD Satmar Amirov, the head of the Republican Agency for Investment and Foreign Economic Relations Ali Nurmagomedov, the director general of the “TI Agroservice Ltd” Jika Tengiz, the head of the municipality “Nogai District” Kazimagomed Yanbulatov and the director general of the Dagagrokompleks LLC Isak Umalatov.

Opening the meeting the head of the republic warmly welcomed the guests and expressed gladness over the fact that large U.S. companies intended to participate in investment projects in Dagestan. The Russian commercial bank "Eksim" may become one more partner of the project.

"This is not the first experience of cooperation of the business structures of the United States in Dagestan. For example: another American company is involved in building plant on production of plate glass by the float-glass method near the Caspian Sea. Dagestan is on the leading position in the Russian Federation for small cattle breeding, production of meat, vegetables, fruits and grapes. Moreover, all the agricultural products are particularly distinguished for their quality and environmental friendliness” – Dagestani Head told.

Jika Tengiz, one of the project’s initiators reported on the details. As to the businessman the project implies cultivation and planting sugar beet in Nogai district of Dagestan, construction of a big logistic  center, vegetable stores and factories producing sugar, alcohol and feed. To implement the project there will be built greenhouses providing seedlings of vegetables throughout the region. Approximately 100 thousand hectares of land will be allocated in Nogai district under the project. This is expected to provide jobs for more than 15 thousand local residents. At the end of the meeting, the Prime Minister RD Abdullaev and the president of the Amity Tehnology LLC Dahl signed a Letter of Intent on joint implementation of the project.