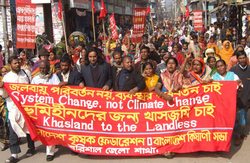 Dhaka, BANGLADESH –  “End  Landgrabbing!, this was declared by the participants of the 20-day “South Asian Caravan on Climate, Gender, and Food Sovereignty 2011” held from  15 November until 4 December 2011 from North to South Bangladesh covering 12 Districts and 18 Sub-districts.

The statement said that leaders and representatives of the Asian Peasant Coalition (APC) coming from the Philippines, India, Nepal and Sri Lanka joined the caravan organized by the Bangladesh Krishok Federation (BKF, Peasants federation), the Bangladesh Kishani Sabha (BKS, peasant women's organization) and La Via Campesina.

“The caravan across Bangladesh brought the people together for climate justice and peoples solutions to the climate crisis. We were joined different peasant organizations coming from India, Pakistan; Sri Lanka; Nepal, and the Philippines; as well as friends from the U.K.; Germany, and Australia,” said Badrul Alam, APC Vice-chairperson for External Affairs and concurrent BKF President.

“In many villages we held meetings, workshops and seminars on the key issues facing our communities. Our very existence is becoming precarious through landlessness and land grabbing; local government corruption; and the imposition of industrial market-based agricultural methods (including the use of chemical pesticides and fertilizers) which have increased our production costs, and debts. While the prices that we receive for our produce is so low that many farmers end up in a cycle of indebtedness and poverty,” added Alam.

Antonio Flores, National Treasurer of the Kilusang Magbubukid ng Pilipinas (KMP) or Peasant Movement of the Philippines talked on the situation of the San Mariano farmers in Isabela as they battle against the land grabbing of 11,000 hectares of indigenous peoples’ lands by Philippine and Japanese firms Itochu Corp. & JGC Group that want to set up the biggest bioethanol project in the country using sugarcane feedstock.  The project also consists of a 19 megawatt cogeneration and ethanol processing facilities concentrated in San Mariano.

“On the other hand, the targeted project area has a potential crop yield of 80 to 90 cavans per hectares for irrigated lands and 60 cavans/hectares for upland rice. If the project pushes through, it will significantly reduce the food production capacity of the community. The affected communities  are calling for the project to be withdrawn, ultimately respecting their welfare as well as the gains of the greater majority of stakeholders, rather than advancing the profits and interests of foreign corporations along with a few national accomplices in the government,” added Flores.

The APC statement quoted that the people’s action against the bio-ethanol project has been successful. The expansion of the bio-ethanol nurseries has been stopped and no additional sites are being developed since October 2.  The GFI are just maintaining the same nursery sites within the 3,000 hectares.

“In Bangladesh, the peasants, led by BKF, have been occupying khas land, water bodies, and unused railway land to grow food, earn a livelihood and lead lives of dignity since 1992.  We were able to occupy 76,000 acres of khas land in South Bangladesh and this was distributed to more than 100,000 poorest men and women in the countryside” stressed Alam.

The APC statement pointed out that, “Our experience has proven positive results. In asserting our rights to land it should be complemented with militant action. We call on the Asian peasants to advance the struggle to end land grabbing and to intensify our campaign for genuine land reform and sustainable development. We must continue to forge international solidarity and contribute to the building of a broad united front against imperialism.