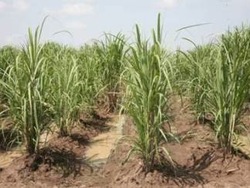 Karuturi Agro Products Plc, the Indian Agro company, sets its sight on erecting a sugarcane factory with a capacity to crush 7,000 tons of cane per day (tcd) in Gambella Regional State.

The company, which operates on 100,000ha plot in Gambella leased in 2009 from the Ministry of Agriculture (MoA), started a sugarcane nursery on 65ha in 2010/11 season and expects the crushing plant to be ready in time for harvest.

The company is currently undertaking a feasibility study. According to the farm manager, site identification, procurements and installation works for sugarcane crushing factory will begin in early 2012.

Ethiopia aims to increase sugar production fourfold within the coming four years to 1.3 million metric tons from 300,000 tons per year. In a bid to achieve the plan the country will spend 1.4 billion dollars to build new and expand existing sugar plants.

Current sugar supply from the three sugar factories does not meet the domestic sugar demand, which is around 440,000 tons per year according to some studies.

“Erecting a sugar factory in Ethiopia will have a huge economic benefit not only for domestic consumption but also if you consider the sugar consumption of neighboring South Sudan, Kenya, Djibouti and Somalia who rely on imports.”

Karaturi says it is conducting the sugarcane plantation adjacent to the sugarcane factory establishment. The sugarcane nursery, located some 20 km from the camp site, will expand to 1,000 ha net area, according to the farm manager.

“Sugarcane takes an average of 17 months to mature but here due to the high temperature we only need 12 months,” said Assefa who predicts sugarcane crushing to being in two years.