Call for due procedure in rectifying the Land Expropriation Act 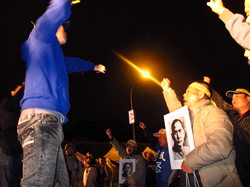 Farmers gathered in front of Presidential Office to call for due procedure in rectifying the Land Expropriation Act (photo: www.coolloud.org)
NB: This call concerns a domestic struggle, but as part of a global problem

Call for due procedure in rectifying the Land Expropriation Act

The Land Expropriation Act (土地徵收條例) in Taiwan is seriously flawed, turning the “public interest” into a fictitious pretext and a convenient tool for those in power— both central and local governments—in association with corporate interests. With the assistance of the Taiwan Rural Front (TRF, 台灣農村陣線), a social movement organization, thousands of farmers and sympathetic citizens from various areas in Taiwan have been fighting against this government-sponsored land grabbing. On July 17, 2010 and July 16, 2011, these concerned citizens twice staged a sit-in and sleep-in for “land justice” in front of the Presidential Office in Taipei. They protested against the expropriation of their farmland without due process or consent, the deprivation of the farmer’s livelihood, work and subsistence, as well as the increasing commodification of land and labor. The participants also drafted a revision of the Land Expropriation Act, proposing that forcible land expropriation be ceased immediately. Facing heightened media attention, Premier Wu Den-yih (吳敦義) promised in both July 2010 and July 2011 to rectify the Land Expropriation Act in consultation with the civil society. Nevertheless, this has proven to be an empty promise.

In August 2011, the Executive Yuan came up with their own draft revision of the Land Expropriation Act. However, this draft revision paid only lip service to the demands made in the TRF-endorsed draft and made almost no changes to the flaws in the original Act. Furthermore, last month, to appease the public for the coming election, the KMT-dominated Legislative Yuan manipulated legislative procedure and bypassed the first reading in the Legislative Yuan. On December 12th-13th, the Act moved onto a second reading, which completely excludes public participation and evades scrutiny of details.

In response to the government’s abuse of power, farmers from the “Taiwan Farmers’ Union” (TFU, 捍衛農鄉聯盟) and the TRF have decided to return to the Presidential Office, for the third time, on December 12th, to make the following demands:

First of all, the TFU and the TRF demand that the Land Expropriation Act be rectified in a transparent and democratic fashion. “We will not allow closed-door negotiations. The initiation of land expropriation must be predicated on the public interest, and the fulfillment of the public interest requires the most stringent legislative procedures open to public scrutiny.”

Second, the TFU and the TRF demand that the Land Expropriation Act be rectified in accordance with the following six principles: 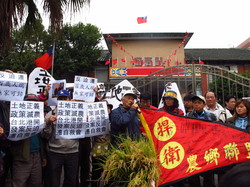 Starting at 4:30PM, Dec.12th, thousands of concerned citizens gathered in front of the Presidential Office to voice their demands. Young people and farmers from various corners in Taiwan came forward to express their grievances. The civil action would continue the next day, starting at 10AM, in the form of a sit-in in front of the Legislative Yuan to oversee the second reading of the Act. “We anticipate more farmers, activists, and citizens to join us in solidarity, and we will not give up until our demands are heard and met,” said Liu Chingchang.

List of expropriation sites in Taiwan (with self-help organizations)