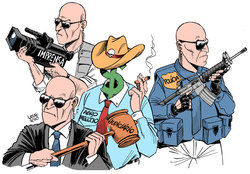 News that farmland prices in Q3 2011 on the US Plains rose to record highs ought not be surprising. In the current global context – depreciating values and poor returns for just about every other asset, plus rapidly growing demand for grains, either for food or biofuels – this boom in farmland values is predictable. The bigger question is – how far can the boom go before it turns into a bubble?

The answer is that the tipping point from boom to bust in farmland values is probably still years away. Mark twain summed it up: “Buy land – they’re not making it any more.” Nor is it just the US where farmland prices are booming. In the UK, last year saw an average 12% increase in farmland prices in England, to well above £10,000/acre. In parts of Argentina and Brazil, prime farmland values are already as high as those in the heart of the US Corn Belt.

Yet in other parts of the world, although farmland prices have been rising fast – in Poland and eastern Germany farmland prices doubled in 2010, while in Hungary arable land prices went up by more than 90% during 2000-2010 – prices remain relatively cheap. In parts of Africa and Asia, and some places in East Europe (Russia and Ukraine particularly), land remains relatively cheap. It’s obvious that pension funds and other big-money managers are ‘getting’ the agri-land investment story. While commodities overall comprise a tiny amount of these money managers portfolios – and land investments even smaller – more and more of them are either buying into farmland or thinking of doing so in the near future. In June this year the Danish pension fund PKA (which invests on behalf of around 250,000, mostly public sector employees) said it had invested the equivalent of $33.5m in African agriculture via the Silverland private equity fund. It aims ultimately to increase its overseas farmland investments to around $250 million.

Reliably authoritative information about large-scale private sector investment in farmland is scanty – not least because the scene is changing so fast – but one report that caught our eye was published by the Committee for Agriculture of the OECD in October this year and can be found here. The Oakland Institute in the US also covers ‘land grabs’ in some detail although it tends to be less sympathetic to such investments. The OECD report studied six private funds and what they are up to, and pinpointed that this is just the tip of a (growing) iceberg, commenting: Each of the funds highlighted is emblematic of a large trend which is occurring in agriculture on a global basis; the deployment of institutional capital in the agricultural sector which had attracted investment capital.” But while there is a growing body of opinion that this kind of investment is nasty, aimed at purely “land-grabbing” (and by implication exploiting local people), the OECD report adds something interesting and possibly counter-intuitive: “This development is resulting in the transfer of best practices between regions (Brazil to sub-Saharan Africa) which should ensure the adoption of efficient and sustainable farming practices, increase the volume and improve the quality of crops available for both domestic and exports markets (to generate hard currency) and enhance the skill set and employment opportunities for many in the local populations.”

This investment tendency is just lapping around the shores of the world’s under-developed farmlands right now, but over the next few years it’s going to become an unstoppable tidal wave. If handled right, it should be welcomed. Food output and yields need to rise just to keep pace with demand – and the capacity of the public sector to get stuck in and do that is severely constrained. Pension funds and other big investors have every incentive to ensure that best practices are implemented, if only to protect their investments.