"Grabbing of drylands is a serious concern" 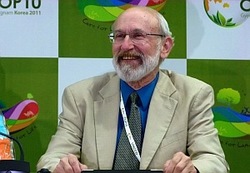 "Most of these land investors have absolutely no idea what they are getting into. They often take the simplistic approach of using big technology to make large-scale plantations and traditional communities are simply discarded. This is totally unacceptable," says UNCCD's Dennis Garrity. (Photo: Manipadma Jena/IPS)

A systems agronomist, Garrity has focused on the development of small-scale farming in the tropics.

Speaking with IPS correspondent Manipadma Jena over telephone from Melbourne, Australia, Garrity outlined steps the UNCCD and governments need to take on issues such as land-grabbing, climate change vulnerability, and loss of biodiversity through genetically modified (GM) seeds.

Q: What policies should predominantly agricultural economies, such as those in India and Africa, adopt to give drylands due importance?

A: Scientific evidence is proving that governments are able to recover higher returns from investments in drylands than investments in rain-fed areas. Now we have technologies like ‘evergreen agriculture’ or ‘double-storey’ agricultural where much of the annual crop production occurs under a full canopy of specific trees species – many of these are ‘fertilizer trees’ that capture atmospheric nitrogen thus dispensing with the use of chemical fertilisers. This benefits food production and the environment.

Q: How farmer-friendly and cost-effective is this technology?

A: In Africa, millions of hectares have been reclaimed by farmer communities through evergreen agriculture. There is great enthusiasm because it not only builds on traditional practices but also gives high yields. We have proof that this can be done on a huge scale. With investment it can be extended to tens of millions of farmers in Africa and India.

Q: There is growing loss of arable land to slow desertification and land degradation. Why is it that UNCCD is focusing more on drylands?

A: Indeed the focus of the Convention should be desertification and land degradation across all agricultural land. The problem is that some countries that are party to the Convention are not comfortable with too much scrutiny in terms of their other areas of deforestation; for e.g. the management of forest lands that have been cleared for agriculture. These countries have argued for a narrow interpretation of the Convention and hindered its ability to deal with issues in a comprehensive way.

Q: Which are these countries?

A: Mainly Brazil. Other countries also feel that all aspects of land degradation should be covered as they are important for global agriculture and food security. The debate carries on from one COP to the next. We are trying to make widely available evidence of problems arising from unsustainable land management.

Q: What would be the most productive way to deal with the stewards of drylands who are the communities themselves?

A: Investments should be skewed towards developing the capacity of the tiller of the land, of communities to enable them to manage their own land. Local grassroots participation has proven to be an absolute, fundamental condition in areas where land regeneration has been successful. Investments need to focus on capacity building and knowledge sharing. Building social capital is the key to future land regeneration, really.

A: Absolutely fundamental role. Often NGOs can be the networking connections between communities. They can bring in the kind of services and support that communities need.I believe the UNCCD secretariat is recognising this fact and seeking to bring in the NGO community to a greater degree.

The original concept of land regeneration in the UNCCD was top-down, and for many years that concept dominated discussion and government interactions. However, in recent years the real focus has been on grassroots participation.

Q: Land grabbing of traditional drylands, in Africa particularly, is emerging as a major growing concern.

A: The concerns around land grabbing, in Africa particularly, are valid and very serious. Large areas are being set aside or sold to outsiders - many of these areas are populated by communities that live off the land and have no alternative livelihood.

Most of these land investors have absolutely no idea what they are getting into. They often take the simplistic approach of using big technology to make large-scale plantations and traditional communities are simply discarded. This is totally unacceptable.

Q: One opinion at the COP 10 was that these investors would squeeze dry the land and just leave.

A: This certainly is a possibility, because outside investors have no stake in the land. The possibility of degrading the land through unsustainable practices is very high. It is also quite likely that they use the land investment for speculative purposes.

Governments should be protecting local communities. All too often these land deals with governments are non-transparent - which is why land grabbing has become such a big deal.

Q: At COP 10, the business sector was encouraged in a big way as investment partners in desertification, land degradation and drought (DLDD) projects.

A: The private sector was invited to build their conscientiousness and their responsibility. Companies are involved in a gamut of agricultural activities – processing, marketing, distribution; they all need to be thinking of how their activities may be degrading or improving the land. With the private sector we are now searching for a certification process that in future can evaluate and monitor business-chains on their land regeneration impact.

This was the first attempt of the Convention to start a dialogue with the Business Forum ( COP 10 had 90 participating companies); it will take some time to level off in terms of benefits for both sides.

Q: Genetically modified (GM) seed companies’ entry into some drylands and the subsequent loss of traditional seed varieties, which are in fact best adapted to the local soil and climate conditions, is yet another escalating concern.

A: The GM seed question is a very big concern. While GM seeds may improve the quality and yield of crops, the real concern is the concentration of the seed industry into just a few firms who hold the patents which allow them to control the future of seeds. We need figure out how we can protect the small farmer and seed diversity.

Q: Do you think the role of women and their contribution is being recognised by governments, policy makers and by their own communities?

A: In many dryland areas males do off-farm work, leaving the farming to women. So, we need to restructure our whole thinking and reach women farmers in terms of extension services, participation in community groups and so on.

Q: In the context of climate change how do you see the future of natural drylands (increasing out-migration being one of the fallouts) and what should governments do about this?

A: It is certainly a critical issue. Our drylands are set to become drier with climate change. We have to look at agricultural systems that are more resilient. Since many of these areas have gone through some of the worst cycles of drought from climate change, we can actually learn from these systems.

Q: How do you see governments adopting DLDD programmes in terms of a time frame?

A: Governments are beginning to respond. In India, the M.S. Swaminathan Research Foundation and I are going to launch an evergreen agriculture programme soon under which a billion fertilizer and fodder trees will be planted in drylands of small farmers. India’s 12th Five-Year Plan (2012-2017) has accorded high priority to agroforestry. In Africa, 20 countries are developing evergreen agriculture programmes and more are slated to join.

I believe we have a possibility now of having a huge new area of action, dealing with hunger in drylands – through ways that are low cost, no cost and no regrets!