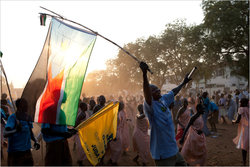 By Katrina Manson, Financial Times
When farmers start to plant chickpeas in a remote spot of South Sudan this month, they may well sow the seeds of a backlash.
South Sudan seceded from the north in July and this Egyptian-run plantation is the most advanced of several farming deals decried as “land grabs” in the world’s newest nation.


Foreign investors are buying and leasing land across east Africa to grow, for export, cereals, vegetables and crops for biofuels. Campaign groups say food-for-export schemes will displace people and degrade the environment, ultimately increasing conflict in fragile regions.
Egyptian private equity firm Citadel Capital, which has leased 259,500 acres for farming in oil-rich Unity state, is among dozens of foreign entities to have struck large land deals in the new country for everything from forestry to tourism. Many such deals were struck before independence. Agreements made since 2007 amount to 9 per cent of South Sudan’s land, at 5.74m hectares, says a report this year by Norwegian People’s Aid.
Citadel managing director Karim Sadek admits the mechanised farm, near state governor Taban Deng’s hometown 45 kilometres from the state capital, is “not a heavy employer”. Most of its 60 or so employees are Zimbabwean. But he denied that the deal was exploitative and said the food would be sold locally. “The big bad wolf theory – the land-grab proposition – I don’t see it applying,” he told the Financial Times.
He said the government of South Sudan had approved the deal and Citadel would pay the state government $125,000 a year for its 30-year lease. “We’re not owning the land; this is a rental. We have produced a sizeable investment so far that will be seen in the field, and the plan is for this project to sell locally.”
The plantation has, to date, provided little local employment, with the 60 or so staff mostly Zimbabwean. Mr Sadek said Citadel subsidiaries had invested $24m, mostly on equipment, and hoped to scale up planting from the 1,500-acre trial of chickpeas this year to 130,000 acres after five years. Citadel would also plant maize and sorghum and introduce on-site processing, such as milling, to add value.
“Our plan is to slowly fill up the demand gap, replacing imports [by] a much cheaper proposition,” said Mr Sadek.
Local production would lower costs, he added. Imported maize was selling for $1,000 a tonne, more than three times the international market price, he said. Given the size of Citadel’s plantation, it could meet local demand for maize and still export.
Land deals agreed by Citadel and others are complicated by the scale of the challenge faced by the new country. Fighting continues along the border and this year the north blockaded deliveries to the south, delaying maize planting.
South Sudan is struggling to deliver benefits to those who spent decades fighting the north in pursuit of independence gained on July 9.
It wants to diversify an economy that derives 98 per cent of revenues from oil. At the same time it needs to subdue local militias and feed an army that soaks up 40 per cent of state spending.
Citadel plans to negotiate local food sales directly with the government, which, critics say, could mean maize is diverted to feed soldiers, not civilians.
“People didn’t fight Khartoum [the north] only to lose their land,” said Anuradha Mittal, executive director of Oakland Institute, a think-tank, who has visited the Citadel site and will next month report on the impact of land deals.
She fears that some land licences had been acquired as a conduit to explore for oil and minerals. “It’s very important to halt and step back, [to] protect the valuable resources of the country instead of having these free-riders who are rushing in,” Ms Mittal said.
Some foreign investors have found South Sudan a difficult environment. Jarch Capital of the US struck a deal for 800,000 hectares, which, lacking government approval, has stalled.
It may require a battle for land in South Sudan to stay locally owned, according to Ms Mittal. “The communities say they’ll chase [foreign interests] away or there’ll be conflict.”
Investors such as Citadel argue that they offer an opportunity South Sudan should not ignore. Mr Sadek said the country would lose out if virgin land were not developed. “This is not the Riviera,” he said. “We’re not talking about real estate value here; we’re talking about productivity.
“The land can remain as it is for the next 200 years, producing nothing. Or you go in and risk money and produce – and for that you need to be rewarded.”