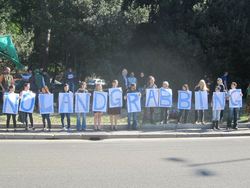 "Land grabbing is one of the most blatant and scandalous examples of how the dominant corporate food system is pushing a growing number of farmers and consumers into poverty," the campaign group Via Campesina said.

The UN Food and Agriculture Organisation (FAO) talks coincide with a meeting of the Committee on World Food Security (CFS), expected to adopt a set of voluntary guidelines on these controversial investments for the first time.

The issue is commonly referred to as "land grabbing" and non-governmental organisations warn that the practice is threatening the livelihoods of small farmers in poor countries and raising food prices around the world.

"Land grabbing is one of the most blatant and scandalous examples of how the dominant corporate food system is pushing a growing number of farmers and consumers into poverty," the campaign group Via Campesina said.

It also called for greater regulation of investments and land governance, as well as a commitment to increased gender equality in agriculture and a massive increase in public investment in small-scale sustainable farming.

"The CFS holds our best hope of ushering in a new era of cooperation that ensures that everybody has enough to eat today and in the future," Barbara Stocking, the chief executive of Oxfam, said in a statement.

"We know it is possible to reduce hunger dramatically - countries like Brazil and Vietnam have shown how it can be done. What is lacking is adequate political will by all governments to take bold decisions."

Equatorial Guinea President Teodoro Obiang Nguema, who has been in power for 32 years and is the current chairman of the African Union, is set to start the FAO conference at 0800 GMT and the CFS will then meet at 1230 GMT.

FAO director general Jacques Diouf and the head of the World Food Programme, Josette Sheeran, whose agency is heavily involved in relief efforts in the drought-stricken Horn of Africa region, will also take part in the talks.

US jazz singer Dee Dee Bridgewater will perform at the ceremony.

French Agriculture Minister Bruno Le Maire and FAO chief Diouf will then hold a press conference on Tuesday on the issue of price volatility -- a key concern for France's presidency of the G20 group of leading world economies.