Land grabs and role of the US government 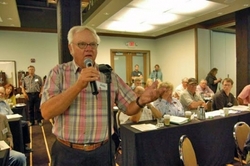 The US government  just held a year-long series of antitrust hearings to supposedly learn more and do something about corporate concentration in US food and agriculture
National Catholic Reporter | Sep. 27, 2011

Land grabs and role of the US government

Most of the world’s work is agricultural work. Most of that is done by smallholder farmers and most of those are women. Increasingly these farmers are finding their livelihoods at risk by the encroachment of foreign investors seeking to reap rewards for their own countries.

Saudi Arabia has invested in large scale leases and purchases of land for food production for its own country. South Korea has invested in Africa lands for biofuel production. Increasingly the United States has facilitated corporate investment in developing countries for private corporations. China has turned to other countries for mineral production as it seeks to grow its own economy.

As small farmers find their livelihoods at risk from these “land grabs,” international organizations like the World Bank, the International Fund for Agricultural Development, and other multi-lateral players have been developing guidelines for “responsible investment.”

The United States has agreed to chair the committee which is reviewing this investment agenda. It will lead a meeting on this in October just prior to World Food Day (Oct. 16) on Oct. 11 in Rome.

I met with civil society representatives in Rome Sept. 5-9 to review these plans. I also met with the Ambassador from the United States to the United Nations Agencies for Food and Agriculture, Ambassador Ertharin Cousin and her staff to discuss the investment agenda which the U.S. chairs.

It was very clear to me that civil society -- small farmers, fisher and forest folk, pastoralists -- look with a great deal of suspicion at the U.S. and other countries’ intentions. They see the agenda of the U.S. is to reap the benefits of public-private partnerships by having the small farmers become contract laborers for large private corporations.

The small farmers prefer a native, local economy where it is local enterprises and not foreign enterprises that create a local economy, where the economic benefits stay in the region and so not migrate out of the country to enrich another country’s economy.

They don’t want to be contract laborers to foreign investors. Such a condition is similar to the tenant farmer conditions in the former American south among sharecroppers. One could point out to U.S. interests the negative impact of the export of U.S. jobs and finances out of the US into foreign markets of the likely dynamic for Asia, Africa, and Latin America. The foreign investment will over time lead to a loss, not a gain of livelihoods and income.

For me it is hard to appreciate the U.S. advocacy on the grounds of the fact that the United States’ justice department and department of agriculture have recently concluded a historic year long study of U.S. agribusiness with anti-trust hearings around the country, with new rules on contracts being advocated by our government to correct the practices of U.S. agricultural businesses, many of which are the same now being touted as partners for international development and small holder contracts.

In my conversation with Ambassador Cousin she indicated that there are many models of partnership with small holders in developing countries and did not seem to regard the objections of civil society too seriously, although she did agree to having a dialogue, a robust dialogue she put it, with U.S. civil society participants in the Rome meetings on the guidelines for land investments and during the meetings of the Committee on Food Security in October.

Many of these companies have already a track record in developing countries of terrible environmental and labor practices. And, like most companies, their primary interest is in making money, not human rights or human development.

The civil society representatives I met with in Rome have every reason to be suspicious of the claims to benevolence of these companies. Their strategy on boosting global food security will be focused less on humanistic concerns and more on enriching themselves by draining the countries of their riches.

[Holy Cross Br. David Andrews is a senior representative at Food and Water Watch, a consumer group based in Washington. He is former director of the National Catholic Rural Life Conference.]