Thanks to speculative investors, the food market will be the next bubble to burst 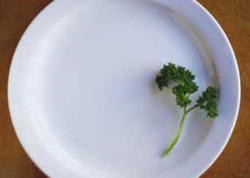 Private investment firms are betting on hunger, and their reasoning, unfortunately, is sound.
AlterNet | September 23, 2011

Thanks to speculative investors, the food market will be the next bubble to burst

Residential real estate may be slumping, but ag land is booming. In Iowa, farmland prices have never been higher, having increased a whopping 34 percent in the past year, according to The Des Moines Register. The boom is driven in part by agribusiness expansion, but also by a new player in the agriculture game: private investment firms. Both are bidding up land values for the same reason: the price of food.

They're betting on hunger, and their reasoning, unfortunately, is sound. This is bad news for would-be small farmers who can't afford land, and much worse news for the world's hungriest people, who already spend 80 percent of their income on food.

Thanks to the world's growing population of eaters and the fixed amount of land suitable for growing food to feed them, supply and demand tilts the long term forecast toward higher prices. More immediate concerns -- like increasing demand for grain-intensive meat and the rise of the corn-hungry ethanol industry -- have fanned the flames of a speculative run-up in agricultural commodities like corn, wheat, and soy. Add cheap money to the mix in the form of low interest rates, along with an army of traders chasing the next bubble, and you've got a bidding war waiting to happen.

The Commodity Futures Modernization Act of 2000 allowed the bidding to begin by allowing the trade of food commodities without limits, disclosure requirements, or regulatory oversight. The Act also permitted derivatives contracts whereby neither party was hedging against a pre-existing risk; i.e. where both buyer and seller were speculating on paper, and neither party had any intention of ever physically acquiring the commodity in question.

Agricultural commodities markets were created so that traders of food could hedge their positions against big swings in prices. If you're sitting on a warehouse full of corn, it's worth making a significant bet that the price will go down, just in case it does, and makes your corn worthless. That way at least you make money on the bet. Derivatives can add leverage to your bet, so you don't need to bet the entire value of your corn in order to protect it.

Derivatives, it turns out, are also really cool if you want to make a ton of money by betting just a little. And if you can bet a lot, even better, as long as you keep winning. The golden years of commodities trading lasted from 2002 to 2008, when prices moved steadily, but not manically, upward. Then they crashed. And then they rose even higher than before. This is the kind of volatility, except worse, that commodities trading was created to prevent.

As he sees it, "Beginning at the end of 2001, food commodities derivatives markets, and commodities indexes in particular began to see an influx of non-traditional investors, such as pension funds, hedge funds, sovereign wealth funds, and large banks. The reason for this was simply because other markets dried up one by one: the dotcoms vanished at the end of 2001, the stock market soon after, and the U.S. housing market in August 2007. As each bubble burst, these large institutional investors moved into other markets, each traditionally considered more stable than the last."

The rush of speculators into agricultural commodities created something like a virtual food grab. While a traditional speculator might drive up the price of a commodity by physically hoarding it, now speculators, fund managers, sovereign nations, and anyone else with the money can do the same by hoarding futures contracts for food commodities, but with no expectation that they will have to physically deal with actual commodities. No messing with deliveries, maintaining warehouses, trapping mice, or other reality-based headache unless they happen to truly want the commodity.

Americans may not be starving, but we are feeling the pinch, paying upwards of a dollar for an ear of sweet corn at farmers markets, while in the southwest, dried corn chicos, a local delicacy, have doubled in price. In D.C., a group of livestock producers addressed the House Agriculture Committee last week, seeking the elimination of federal mandates for ethanol use in gasoline. The meat makers blame high corn prices on the biofuels industry.

But the commodities markets of the world are connected, running together in a herd, which makes this about a lot more than corn. It is likely that increased demand for meat and the rise of ethanol were indeed a trigger in rising corn prices, De Schutter says, dragging the rest of the grain markets into the bubble. But it was deregulation that opened the doors to betting on hunger.

A logical place to start calming food prices would be to un-deregulate them. And there's hope of that happening. The United States, by far the biggest player on the commodities stage, just made a step in that direction with the passage of the recent Dodd-Frank Wall Street Reform and Consumer Protection Act. The Act puts size limits on individual holdings, including agriculture commodities and derivatives.

Unfortunately, given the global nature of capital, even if the U.S. were to completely shut down speculation, it would just move offshore. International regulation is what's needed, and since the U.S. opened this Pandora's box of speculative horrors with deregulation, we have the moral responsibility, not to mention the political firepower, to shut it. With financial regulators underfunded and understandably distracted, a strong show of public support could help get their attention. But if our biggest inconvenience is higher prices for meat and sweet corn, that public display might be hard to come by. Especially if our retirement portfolio, wisely diversified with commodity index funds and ag land holdings from Iowa to Ethiopia, is growing.