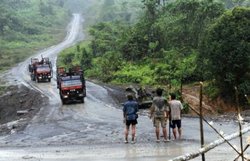 Foreign-investor purchases of farmland in poorer nations are displacing local populations and adding little to a country’s wealth, even as agricultural prices increase, according to Oxfam International.

As many as 227 million hectares (561 million acres) -- an area one and a half times the size of Alaska -- have been sold or leased since 2001, with most of the “land grabs” occurring in the past two years, Oxfam said in a report released today.

With the consent of governments, weak legal codes allow the purchase of large tracts with no regard for residents or the environment, said Oxfam, which is based in Oxford, U.K.

“Large-scale demand for commodities is driving a lot of these acquisitions,” Rohit Malpani, an adviser to Oxfam and an investigator into land buys in South Sudan, said this week in a telephone interview in Washington. “There is an inequity of power between investors and the local communities.”

Global food prices have increased 26 percent in the past year, the United Nations says. The world’s population is forecast to jump to 9.3 billion by 2050 from an estimated 6.9 billion in 2010, requiring a 70 percent increase in food production, according to the UN. In February, when costs peaked, the World Bank said the increased expense had pushed 44 million people into “extreme poverty” in a little over half a year.

Higher returns on farmland and rising food prices are luring investors in Africa, Latin America, the U.S. and parts of Europe, while China’s shrinking farmland and water resources are pushing its companies to pour money overseas to secure supplies.

TIAA-CREF, the $466 billion financial services giant, has $2 billion invested in some 600,000 acres (240,000 hectares) of farmland in Australia, Brazil and North America and wants to double the size of its investment.

China, the largest soybean and grain consumer, is poised to boost investment in farming in South America as it seeks to secure food supplies, Rabobank International said July 28. The country has also targeted Africa and encouraged Chinese agricultural businesses to expand overseas.

The Oxfam report, which details cases in South Sudan, Uganda, Honduras, Guatemala and Indonesia, calls for international organizations to condemn the purchases and help develop and observe codes for ethical land-buying.

It criticizes financial institutions such as the World Bank and its private-sector finance arm, the International Finance Corp., and companies including Sime Darby Bhd. (SIME), based in Kuala Lumpur, for supporting land acquisitions, at least indirectly.

“Many of these investments, they’re not meant to improve local food security,” Malpani said. “There has to be a balance between international demands and local rights and responsibilities.”

In the Philippines, the government suspended in 2008 a plan to lease 1.2 million hectares of farmland to Chinese companies to grow rice, corn and sugar, after then Congresswoman Risa Hontiveros-Baraquel filed a case with the Supreme Court, questioning its legality.

In a case cited by Oxfam, a subsidiary of Sime Darby acquired village land in Indonesia in 35-year leases in return for promises of new housing, schools, a health clinic and water facilities, most of which hasn’t materialized, said the aid organization. The villagers have been blockading roads in protest, Oxfam said.

Sime Darby is going through proper channels and working with villagers to improve their community in the company’s plantations in Liberia and Indonesia, Chief Executive Officer Mohd Bakke Salleh said.

“We’re creating economic activity in these areas, so to be accused of land-grabbing is a bit harsh,” Mohd Bakke said in an interview before the report was released. The company is “working with the locals to improve on the facilities and infrastructure of the area.”

The International Finance Corp. “is actively engaged” to verify reports and information on land-buying practices to ensure its ethical standards are being met, Desmond Dodd, a spokesman for the organization’s sub-Saharan Africa office in Johannesburg, said in an e-mail before the report was released.

To contact the editor responsible for this story: Steve Stroth at [email protected]