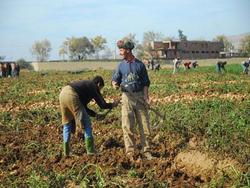 ALGIERS (Reuters) - Algeria has for the first time formally invited expressions of interest from investors, including foreigners, seeking to acquire stakes in the country's farming sector.

Agriculture in Algeria, an energy exporting former French colony, has been largely closed to foreign investment but the government is cautiously opening up the sector to try to increase productivity and cut dependence on food imports.

The tender for expressions of interest, published on the Agriculture Ministry's web site, www.minagri.dz, states that investors will be able to take stakes in pilot farming enterprises.

But it said: "The land and buildings ... associated with these farms are, and remain, state property."

It said the tender was open to domestic and foreign investors. It did not give any details of what farms were open to investment or what surface area they covered.

Agriculture ministry officials said at the time the law would not open the door for state-owned farmland to be sold, a politically-sensitive issue in Algeria.