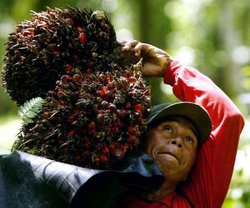 The industry group sees countries such as Gabon, Nigeria and Brazil ramping up production in coming years, as the land expansion of plantations in Malaysia has reached a natural ceiling and Indonesian growth has been slowed by a freshly inked two-year moratorium on forest clearance.

These new players may be keen to work with the RSPO, an industry body of consumers, green groups and plantation companies aiming to promote growth of sustainable oil palm products, to avoid the controversy over deforestation that has dogged Southeast Asian firms such as SMART .

“We see a lot of interest in Africa, Latin America... these countries will be very significant players in the very near future,” Darrel Webber said. “We haven’t been putting much effort into these countries, but they on their own, have sought us out.”

Indonesia and Malaysia are currently the top producers of palm oil, used in products such as food, cosmetics, tyres and biofuels, accounting for over 90 per cent of world output.

But groups such as Greenpeace have accused some firms of chopping down rainforests and illegally draining peatlands, stores of greenhouse gas carbon dioxide. The green campaigns have led major buyers such as Unilever , Nestle and Burger King to suspend purchases from SMART.

“Many governments, many industries in these emerging new frontiers for palm oil are looking for RSPO to set the standard from the very beginning,” said Webber, adding its membership had risen 20 per cent in the past year.

“Africa, the origin of the (palm) tree, is a net importer,” added Webber. “They need to produce for their own consumption, so it is a food security thing for them as well.”

Golden Agri Resources said in 2010 it plans to invest in Liberia-based Golden Veroleum that signed a US$1.6 billion (RM4.74 billion) deal for a 500,000 acre estate in the southeast of the country.

“These new frontiers have been coming up over the years, and this year it seems that all the engagement in the past has suddenly bore fruit, with a lot of companies becoming members,” Webber added.

The RSPO has set up green standards for production, with volume of its certified sustainable palm oil on the market rising from 1.3 million tonnes in 2009 to 2.2 million in 2010.

RSPO-certified crude palm oil production capacity is about 5 million tonnes per year, or 10 per cent of global output, Webber said.

But with many palm oil producers criticizing the RSPO for being too much in favour of green groups, both Malaysia and Indonesia are now forging ahead with their own schemes.

“We find ISPO (Indonesia Sustainable Palm Oil) complimentary to our work,” said Webber, whose group is due to hold its annual meeting in Borneo in November. “Both standards have looked to the RSPO as a model.”

Proof that the RSPO, tasked with greening the US$30 billion industry, still has a significant role to play, however, came early this year.

In April, the green group found Malaysia’s IOI Corp to have breached its membership obligations, making it the second firm to face censure.

RSPO suspended IOI’s ongoing green certifications for its mills and warned of further sanctions if the company did not address allegations that it felled forests, drained peatlands and engaged in a land dispute with locals in Malaysia’s Borneo state of Sarawak.

“We are still dotting the Is and crossing the Ts,” said Webber on a possible resolution. “We purposely decided not to put a fixed deadline on these things.” – Reuters