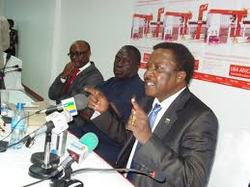 AgriSol & Serengeti Advisers: Land Grabbers ?
LAND RIGHTS RESEARCH AND RESOURCES INSTITUTE
LARRRI/HAKIARDHI
By Bernard Baha
Senior Programme Officer
Research Publication and Documentation
THE POLITICS OF INVESTMENT IN LARGE SCALE AGRICULTURAL VENTURES; CASE OF MPANDA RUKWA TANZANIA
1.0 Introduction
Tanzania has always been a country in the spotlight over cases of land grabbing for various uses. Over the recent past there has been a lot of information in both print and electronic media of land being taken for various investment purposes. Little is known to the public of the deals the government is entering with these foreign investment companies that are eyeing Tanzania as a destination in agricultural investment. Investment in agricultural land has been a key driving force in Tanzania as a rush now has intensified in which agricultural land is being taken for various uses. An empirical study on the ground identifies three key motives for the rush; land for bio-energy purposes, food for export and carbon credit. This is taking place in different places and regions in Tanzania, of recent Rukwa region and Kigoma have joined the race in land acquisition thanks to the Iowa-based Summit Group and Global Agriculture Fund of the Pharos Financial Group, in partnership with AgriSol Energy LLC and the College of Agriculture and Life Sciences at Iowa State University and The Tanzanian arm of AgriSol Energy: AgriSol Energy Tanzania and Serengeti Advisers Limited, a Tanzanian investment and consulting firm who are currently planning to invest in agriculture in the land that is currently designated as refugee settlements in Katumba and Mishamo in Mpanda district and Lugufu which has already been evacuated in Kigoma rural district.
It is Serengeti Advisers that are key to the AgriSol Energy LLC decision to choose Tanzania as its investment destination over Kenya and Mozambique. According to Mr. Bertram Eyakuze, who is currently serving as AgriSol Tanzania Ltd CEO[1] Serengeti Advisers’ primary role is to advice investors on how best they can invest in the country and for the best interest of both Tanzanians and the Investors. For the purpose of AgriSol, Serengeti Advisers have assumed lead role and used their resources to make sure that advanced and highly mechanized agriculture is used in Tanzania for consumption of Tanzanian and foreign market. This is in line with the National Kilimo Kwanza initiative which was promulgated in 2009. Through Kilimo kwanza the private sector is being encouraged to enter into production with a view that as a nation we need capital, technology and skills to transform the agricultural sector. Private sector is therefore being mobilized to take part in the sector that has long been neglected.
HAKIARDHI in collaboration with Tanzania Land Alliance, Tanzania Bio-Energy Forum (TABEF) made a follow up visit to Mpanda to explore the nature of capital investment taking place in Rukwa and Kigoma and the socio-political implications for the peasantry in the area. In this briefing report a highlight of the findings on the basis of the objective and specific objective is given, specifically on the nature of the process of land acquisition and the response from different actors on the ground. This brief is limited only to Mpanda district where the team managed to visit two settlements planned to be used for investment after the resettlement process of the refugees and now newly naturalized Tanzanians in Katumba and Mishamo.
2.0 The politics of capital investment in Mpanda district
2.1 AgriSol Energy and its quest for investment in the area
The story of AgriSol Energy LLC is incomplete without deducing the role of a young Tanzanian who spent over 10 years in America, in his submission to the LARRRI team Mr Bertram who is now the CEO of AgriSol Tanzania Ltd was approached by colleagues in America who wanted his advice over investment opportunities in Africa and linked him with AgriSol Energy LLC a company which is among the biggest agricultural investor in America. According to Mr. Bertram three countries in Africa were given priority for agricultural investment, due to the following criteria; Favorable climate, fertile soil, and political stability and on this benchmark at the time Tanzania, Kenya and Mozambique were considered as the only African countries that can be accorded investment by AgriSol. At latter stage it is Tanzania that was selected fulfilling the adage that charity begins at home. After these considerations, negotiation took off between AgriSol and government agencies as to which land can be used for investment. The claim that Tanzania has large pieces of land was unrealistic since the government couldn’t locate or prove the existence of unused land. It was at this negotiation the idea to use Refugee Camps that were to be evacuated after resettlement and repatriation process geminated, this Idea found favor of the government and the investors. Earlier to this, land owned by National Service, Prisons and some of the defunct government plantations and Ranches were in the mind of negotiators.
AgriSol Energy LLC and its sister company AgriSol Energy Tanzania Ltd whose share is 25% draw much of their investment objectives from the Kilimo Kwanza initiative drive whose main thrust is agricultural transformation. In his press release AgriSol Tanzania Chairperson Iddi Simba[2], states that the company intents to create large-scale agriculture zones that; help stabilize local food supplies and bring lasting food security to our country; create jobs and economic opportunity for local infrastructure improvements; spur investment in local infrastructure improvements; develop new markets for our agricultural products; and attract investment in related businesses. This is corroborated by the statement from Rastetter[3] AgiriSol Energy LLC CEO who says the project will show how the use of high-quality seeds, machinery and chemicals common to U.S. agriculture can dramatically increase food production in Africa and improve the livelihoods of local, poor farmers.

2.2 Land grabbing or investment venture?
AgriSol plans to invest in the area has attracted wide attention both within and outside Tanzania[4]. It has been defended by the top leadership of the country and some members of the parliament as a right investment venture that will benefit the local communities and contribute in transformation of agriculture in Tanzania. Likewise it has been vindicated by supporters of investment that through this venture Tanzania is going to be self sufficient in terms of food security and it stands a chance to be a top exporter of cereals to the region and beyond apart from benefiting through technology transfer and out growers schemes that will benefit the surrounding communities that are said to also through this venture secure the market for their produce. However this position is not shared by all sections of the society locally and internationally. Like many other similar ventures this is seen as another land grab. Since the actual implementation of the investment has not yet started critics are singling out the Memorandum of Understanding (MoU) clauses as a sign that it is going to be another case of land grabbing and of course through experience of similar cases in Tanzania. In this highlight we are trying to build the case through the findings from the field and general knowledge and experience on cases of land grabbing in Tanzania and Africa in particular.
Tanzania like many other African countries have opened up its door for investment capital from within and outside, with more weight on attracting foreign direct investment. Agriculture sector has also seen its share of the same with many companies looking for ventures into food crops for export and related investments in bio-energy and carbon credit schemes involving huge chunks of land. Large-scale agricultural investments in Tanzania not only receive support from the political elite establishment, it also has its backing in the legislative frame work, in its quest for preparing conducive environment for investment the government has in place the framework that concentrates much of the decision making powers at the centre to enable easy transfer of land and where necessary acquire land for public interest, there is a framework that governs investment in general and an organ responsible for coordination of the same, Tanzania Investment Centre which apart from facilitation role manages incentives for would be investors in Tanzania.
The justification for investing in agriculture is on the basis that as a country, arable land accounts for 44 million hectares out of which 10.1 million hectares are currently under cultivation. Irrigation accounts for about 29.4 million hectares suitable for irrigation; out of which 2.3 million hectares are of high development potential and 4.8 million hectares are of medium development potential. There are many lakes, permanent and seasonal rivers and underground water sources for irrigation and other uses.[5] It is this kind of conclusions that brings the notion that there is plenty of unused land to be handed to private developers. In a bid to attract investors the government offers the following investment incentives package in agriculture sector: Zero-rated duty on capital goods, all farm inputs including fertilizer, pesticides and herbicides, Favorable investment allowances and deductions on agricultural machinery and implements, Deferment of VAT payment on project capital goods, Imports duty drawback on raw materials for inputs for exports, Zero-rated VAT on agricultural exports and for domestically produced agricultural inputs, Indefinite carry-over of business losses against future profit for income tax and Reasonable corporate and withholding tax rates on dividends.