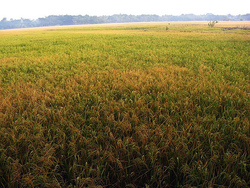 The government has taken a fresh move to re-evaluate the proposed contract farming agreement for food-grain production in Africa to meet the country's demand.

The move came after two major entities of the government, in a recent inter-ministerial meeting, strongly opposed the proposal of signing the accord, following plea of some local businessmen.

The Ministry of Finance (MoF) and the Bangladesh Bank (BB) in the meeting brought to notice several roadblocks on bringing the produced food grains from the African countries to Bangladesh.

They said the government will have to bring some major changes to its existing financial policies and regulations to allow the proposed contract farming in Africa.

Following the opposition, the government has planned to form a high-powered committee, headed by Prime Minister's Economic Affairs Adviser Dr Mashiur Rahman, to review the pros and cons of the contract farming in Africa, officials said.

Talking to the FE Monday Mashiur Rahman said, "We are yet to get any written report with details of the outcome or benefit of the contract farming proposal in Africa."

It would need detailed scrutiny to find out how the country can be benefited through the initiative, he said.

"If the initiative benefits the country, then rules and regulations can be changed for greater interest of the nation."

On formation of a committee to review the matter, Mr Rahman said he is yet to get any information formally.

"We will analyse various factors, like - balance of payment (BoP), existing regulations, import situation, types of crops, yield of production etc of the contacting countries," he said.

Responding to a query, the adviser ruled out any possibility of money laundering, if the initiative is implemented.

"Entrepreneurs have placed formal requests to the government with a good intention. There is no scope of money laundering in it. Offshore transaction and false invoicing usually cause money laundering."

However, the investors will have to submit a report on overall situation of the countries where they want to invest, he added.

The Ministry of Agriculture is reviewing a proposal of private sector on contract farming of around 10,000 hectares of agricultural land in Tanjania and 20,000 hectares in Zambia.

The ministry held an inter-ministerial meeting last month to discuss about implementation of the contract farming proposal.

In the meeting the Banking and Financial Institution Department said the government should re-examine the proposal, as it is giving all-out efforts to increase crop production and generate employment in the country through attracting foreign investment, according to the minutes of the meeting.

The government should also evaluate payback period of the investment proposal and rate of return, the paper said.

The BB expressed deep concern over the proposal against the backdrop of the existing downward trend of BoP due to sharp increase of import compared to export. It also identified risk factors in returning the invested money to Bangladesh.

The Department of Finance said the existing Foreign Exchange Regulation Act 1947 does not permit any Bangladeshi citizen to invest abroad.