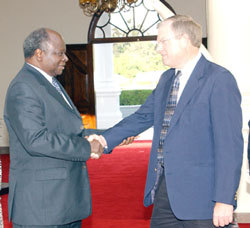 “MPs want ActionAid to keep off”, screams the caption of a story in the East African Standard of January 3, 2006. The story is attributed to MPs Oburu Odinga and Ayiecho Olweny who claim that the NGO is inciting residents of trouble ridden Yala Swamp rice scheme in which American investor Dominion Group of Companies has been embroiled in a tussle with the community over issues of land dispossession.

The MPs vow that they will resist at all costs this bid “to frustrate economic projects in the Nyanza region” “we need organizations that bring solution to our problems and not those bent on killing our initiatives”, they continue. From this report it is now clear that this project is an initiative of Odunga Mamba a businessman and the two MPs because they claim in the article that the government was the first to thwart the project and that they the three were ready to carry their own cross by inviting investors to turn around the economy of Nyanza. The community they claim had began to enjoy the benefits of the project.

Nyanza has always been a big issue, definitely bigger than all the three leaders and indeed all the politicians and Luo elite who have been championing the cause of this American investment. On this issue of Dominion someone needs to speak up. The truth is being smothered with such abandon and it is this that invites more questions rather than answers.

Following numerous press reports highlighting tensions between the farm and the community and a visit to the farms with a visiting group from Central America in November last year I thought I would be failing in my duty as a social activist if I did not take my time to understand the issues surrounding this mega project. So I visited the company and spent a whole day with the country Director and other staff to understand fully the operations of this project. I further spent two days with the communities of Yimbo and Alego to hear their side of the story. I was not able to speak to communities of Busia who also happen to share this ecosystem. After these encounters I posit that we must look at this Dominion coin inside out and back to front.

First Yala swamp is not a luo resource; this is a shared resource of a regional lake and is therefore a wetland that belongs to East Africa. It too is a buffer zone between land use and the lake. It is here too that the lost species of Lake Victoria are found regionally. Yala swamp covers approximately 17,500 ha. that has always been earmarked for reclamation ever since Sir Alexander Gibb and Partners made the first proposal in their study, Kenya Nile Basin Water Resources in 1954-6. Three phases of reclamation and development were identified the first of which was completed after 2,300 ha. had been reclaimed. The second phase was started but work stopped in 1970 due to lack of funds after 7km diversion canal of the Yala River had been constructed, the Lake Kanyaboli retention dyke and a feeder canal had also been put up.

Even as the Lake Basin development Authority (LBDA) went on to start the reclamation ecologists and zoologists argued that reclaiming the swamp would precipitate unpredictable ecological hazards. Reclamation ecologists predicted would affect the three lakes Kanyaboli, Sare and Nambeyo negatively. Papyrus the swamp’s most dominant plant would disappear, the fate of sitatunga a buck and a bird called gonolek would be unknown. The filtering effect of the swamp of pollutants from Yala River before water is discharged to the lake would be lost and the breeding and nursery grounds for fish and birds would have to go. The fish species mbiru, fulu, kamongo, okoko, nyamami, ningu, fwani, adel and ngege found in these three lakes would all disappear. The people of Siaya, Bondo and Busia who depend on the swamp would be adversely affected. These were the postulations of ecologists’ way back in 1960s to 80s, claims which led the late Hon. Peter Okondo then MP for Busia South (Bunyala) one of the most vociferous proponents of reclamation to argue that “as an economic unit, the swamp is useless; it is a danger to the economy and it takes away land. It is a breeding ground for mosquitoes, vermin and snails. The swamp should be drained to improve the ecology of the area”.

Were Okondo to wake up from his grave he would be shocked that Busia County Council has been excluded from the reclamation project handed over to Dominion since 2003. According to Bondo MP Oburu Odinga Dominion had revolutionized agriculture in the area with new farming techniques, thus improving yields from 5 to 35 bags of maize per acre with 10 bags from each acre being offered to locals. The MP further accuses ActionAid of inciting locals over ‘petty environmental concerns’. NEMA it is reported approved the company’s first environmental impact assessment and is evaluating a second one. ActionAid is asked to table its successes in Nyanza and compare notes with Plan, Care or Sana who have completed major projects in the region.

What are these petty environmental concerns? Dominion’s EIA to be exact is a scandal. Dominion’s initial license issued in 2004 permitted the company to grow rice on 3,700 ha. leased from Siaya and Bondo County Councils. All of Dominion’s 9 projects are lumped together in the EIA submitted to NEMA each of which falls in the second schedule of the EMCA [58 (i) (4)] as projects for which an independent EIA must be undertaken. The projects therefore lack the kind of detail required before implementation. For example Dominion proposes to construct a fish processing plant, a rice mill, a feed mill, a cotton ginnery, a fuel storage and dispensing station, a dam, barrier dyke, weir and irrigation, a hydro-electric generation plant and agriculture projects for rice, maize, cotton, soya beans, sunflower, artemisia, onion etc.

All these projects need a full and independent EIA. As things stand now the company has gone full throttle to implement most of these proposals without due process. The rice for which license was issued has not even been commenced. There is no socio-economic analysis of these activities. It is in fact disturbing that the professionals who conducted the EIA were employees of LBDA who are closely linked to Dominion. The Environment Management Plan is even more scandalous. It just lists what it calls negative and positive impacts without detailing the strategies for mitigating such impacts.

One expects MPs like Oburu to explain why the company is carrying out activities on swampland beyond the leased area of 3,700 ha. How was the new land acquired? Why is Dominion implementing proposed projects without NEMA license? The EIA does not discuss the compulsory eviction and resettlement arrangements for communities that are being forced to vacate their lands for Ksh. 45, 000 per acre. The EIA report does not discuss the perimeter fence that has been put up by Dominion denying locals easy access to pasture and water. The EIA report does not capture the felling of trees for charcoal and timber by Dominion and how this might be mitigated. The land lease negotiations excluded the communities of Bondo and Siaya; this should have been highlighted in the EIA. The EIA does not capture the fact that local communities are now not allowed to farm lest they contaminate crops grown by Dominion. They now depend on crops donated by Dominion making them more food insecure.

How much area will each crop cover? How much chemicals will be used? How will Dominion deal with the high water demand for their activities? What machines will Dominion use and what will be their impact on the environment and jobs? What pests will the new crops introduce to the area? Why is Dominion retailing crops such as cabbages and onions in the local market at the expense of local vendors? Cotton will require the use of agro-chemicals. These will contaminate Yala River and Lake Victoria through run-off thereby affecting the fish export industry. Is this not an issue for the EIA? Has the fisheries department permitted dominion to put cages in Lake Kanyaboli? How will the waste generated from the cages be dealt with? The quantity of water to be extracted has not been surveyed and quantified. There are many other issues around fish cages, the rice mill and the ginnery that I leave for another discussion.

On a more important note both Dominion and their EIA ignored Busia. Several fish processing plants in Kisumu are operating at less than half their capacity due to low fish supply. Why should Dominion build another one in Yala swamp? Bondo fishmeal plant less than 50 km away is having problems getting raw materials. What would be the economic viability of building another one at the swamp? LBDA’s rice milling plant in Kibos is grossly underutilized, what is the need of a new one? Ndere cotton ginnery exists; why not use it instead of building a new one?

According to the Country Director Grahame Vetch, his personal assistant Joyce Oluoch and the environment officer a Mr. Were, Dominion will contribute massive proteins to the community; employment and a five fold salary multiplier effect for each employee. Poverty will be alleviated for at least 20% in the area and it was gratifying to the company that the market from Siaya had moved to the company’s gates. The company has 240 employees and 1000 casuals on piece rates. Beekeeping and handmade paper were other ventures the company was engaging in.

Without prejudice to part (xxii) of the Memorandum of Understanding signed between the Company and Siaya and Bondo County Councils on the 20th of May 2003 which provides: “this document and all related documents shall be confidential as between the parties hereto so far permitted by the laws of the Republic of Kenya and shall not be released to any other person without the first express written consent of others”, what is Ksh. 1,254,782 per annum for year 1-3 shared on an 86%: 14% basis between Siaya and Bondo Councils respectively for the gazetted area and a further Shs. 1,085,218 for the additional area for the same years on the same portion?

Can this deal with the poverty in Nyanza? And what will happen after the 45 years of this Dominion domination? Even when the Director confirms that they have put together a paper to the Ministry of Health asking them to sanction the use of diluted DDT a banned chemical worldwide to eradicate malaria should we not be worried? When pedestrians from Kadenge to Yimbo cannot use the walkway beyond 6.30pm what is that but slavery? This project stinks. The state in Kenya must stop seeing natural resources only as instruments towards the agenda of industrial growth and economic development or sources of revenue. The Yala Swamp project is an undeclared emergency for which we must all rise if we care.

ActionAid and others must be supported to expose the excesses of capital. It is on this basis that we in the civil society wish to consolidate our collective effort with like-minded institutions to champion the cause of communities that have been abandoned to their destinies by our greedy and selfish leadership.