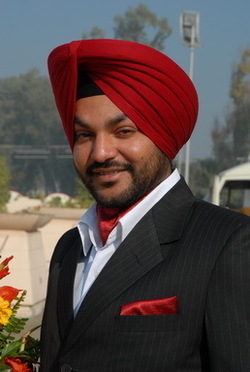 Puneet Singh Thind, self-described on his Twitter account (@puneetthind) as "an international marketer - turned export manager - turned social activist/farmer" where he tweets "Looking for someone to guide me on Agriculture in Ethiopia... We, farmers from Punjab want to play 2nd inning of green revolution there..."
Business Standard | August 02, 2011

Karuturi Global Ltd, the largest rose producer in the world, has acquired about 7,70,000 acres of land in Ethiopia for cultivation of cereal crops.

If everything goes as planned, the enterprising farmers of Punjab would be seen managing large farms in Ethiopia in near future. Karuturi Global Ltd, the largest rose producer in the world, has acquired about 7,70,000 acres of land in Ethiopia for cultivation of cereal crops, palm oil plants, sugar cane, etc and is offering work to the farmers of Punjab.

This is for the first time that a global corporate has come forward with a concrete business model of collaborating with the Indian farmers, who had been trying to explore such opportunities for the past two years.

Paving way for others, Punjab-based farmer Puneet Singh Thind has signed a memorandum of understanding (MoU) with the company as a consultant and would manage about 2,500 acres of land initially.

Speaking to Business Standard, Puneet Singh Thind said, “I have visited Ethiopia a couple of times and was really keen to start farming there. So I have signed an MoU with the Karuturi Global Ltd. They are going to provide all kind of infrastructural support to me. Very soon, I would float a company for managing the farms. Initially, I would be managing 2,500 acres of land. As far as revenue sharing is concerned, it would be in the ratio of 65:35.”

He added further, that the land is very fertile and virgin. “I am planning to have multiple crops and would grow maize, wheat, paddy, vegetables, etc,” he added.

Earlier, Karuturi Global, Founder and MD, Sai Ramakrishna Karuturi said, “This initiative gives Indian farmers the opportunity to enjoy the economies of scale that come along with large scale commercial farming seen in America or Australia.”

Indian farmers in collaboration with a corporate body such as Karuturi can avail of the agro ecosystem that the company offers on a revenue sharing model. Karuturi has been in Africa for close to a decade and is set to be a key player.

Earlier, the progressive farmers, mainly members of Poscon (Confederation of Potato Seed Farmers) were planning to take about 2000-5000 hectares of farm land on lease in Ethiopia for growing cash crops like oilseeds, pulses, sugarcane and maize. Also, farmers’ organisation like Rashtriya Kissan Sangathan was exploring Ethiopia for opportunities in agriculture.

While, the progressive farmer members of Poscon are planning to take about 2000-5000 hectares farm land on lease in Ethiopia for growing cash crops like oilseeds, pulses, sugarcane and maize, members of Rashtriya Kissan Sangathan are looking to grow cotton, paddy, non-edible oil seeds and palm land by taking 5,000 hectares of land on lease.

According to their members, fertile land coupled with low lease money and developmental cost, makes a viable proposition for the farmers for cultivation.