Corporate farming: Fair trade? Well, not really because we’re giving our land away 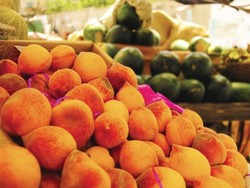 Corporate farming: Fair trade? Well, not really because we’re giving our land away

There is something about big business that makes people nervous. They think of faceless corporations taking over. The small worker or business owner becomes invisible and is pushed to the margins by men in suits who rake in the profits which are not the fruit of their own labour.

One branch of this phenomenon is corporate farming, which as its name suggests is big business owning farms. Is this a good idea for a place like Sindh, asked a few experts in an attempt on Saturday to initiate a public debate on the trend.

Corporate farming has already started in Pakistan. At a seminar organised by the Participatory Development Initiative in association with Oxfam-GB/EU, Idrees Rajput, an irrigation expert and a former member of the Sindh government, explained the history.

During former president Pervez Musharraf’s regime, the government started leasing farm lands after passing the Corporate Farming Ordinance in 2001. The ordinance was approved by the cabinet in 2004 when the provinces identified 1.14 million hectares of land that were available to be leased. This law now allows Pakistani and foreign companies to lease land.

As a result, the United Arab Emirates signed a memorandum of understanding with the Balochistan government for 150,000 hectares near Mirani Dam. According to Zulfiqar Halepoto of the Thardeep Rural Development Programme, another deal for 1,187 hectares is in the pipeline. In addition to that, a Dubai-based investment group acquired 324,000 hectares of Pakistani farmland. His information came in part from a report published in The National in 2008. The Qatar Meat and Livestock Company (Mawashi) is reported to have sunk one billion dollars into corporate farming in Pakistan. They negotiated with the Sindh government to lease around 12,140 hectares in Shikarpur, Larkana and Sukkur, Halepoto added.

The Punjab government is also part of the picture as it agreed to lease lands around Mianwali, Sargodha, Khushab, Jhang and Faisalabad. In 2008, Reuters reported that the Dubai-based private equity firm said it was looking at investing in agriculture in Pakistan. The National reported that the UAE was considering “the purchase of farmland worth $500 million in Pakistan as part of a strategy to lower food import costs”. Pakistan was expecting “a potential investment of $400 million to $500 million in land deals, which could be anywhere between 100,000 acres”. In May, the Financial Times reported that the Dubai-based private equity company that is one of the largest in the Middle East, had been buying up farmland in Pakistan for added food security and to fight inflation.

The question is now whether it is wise to allow the concentration of farming to rest in a small number of corporate firms? There are a number of possible problems. For example, Dr Azra Talat Sayeed of Roots for Equity said at the seminar that she was sceptical that the government is telling the truth when it says that the land it leased is not being farmed and hence there is no threat that the indigenous communities living on it will be displaced. She disagrees that corporate farming does not erode local food sovereignty. She also raised alarm bells against the environmental hazards posed by the deforestation land degradation they undertake and their increased water consumption.

Other countries around the world have grappled with this debate. In 1920 there were approximately 6.5 million farms in the United States. 30% of the population lived on farms. In 1992 those numbers were down to 2 million farms and less than 2% of the population living on farms. According to researchers, corporate farming in the US has challenged the age-old structure of farming and changed the culture of rural America.

Proponents of corporate farming say that it is more efficient than family farming and leads to more affordable food supplies. But experts have argued that it leads to more unemployment and poverty. In a country like Pakistan, where our cities can barely take the influx of rural migration, or people leaving their villages, surely it makes more sense to empower and not disenfranchise the small farmer.

Then, as Idrees Rajput explained, corporate farming also takes away from people or middlemen the allied jobs linked to farming such as the entire chain of agriculture-related business, including seed supply, agrichemicals, food processing, machinery, storage, transport, distribution, marketing, advertising, and retail sales. In corporate farming all this work is prefaced on a centralised model.

Also worrying is allowing a handful of companies to control large chunks of the market. This allows them to manipulate it, supplies and prices. At one point in the US, for example, according to researchers, 80% of the beef industry was controlled by the biggest four companies.

Another speaker, Dr Fateh Mari, with the Water Sector Improvement Project, warned that the rights of small farmers, especially women farmers need to be protected.

At the end of the seminar, the experts urged the government to consider a few policies, which included supporting small growers, giving state land to landless women and men haris and an immediate end to leasing out land to other countries.

Set up farmer courts in the districts to give justice in loans for bonded labourers, distribution of water, land disputes

Make a policy on the rights of small farmers, the impact of climate change, ensure their registration