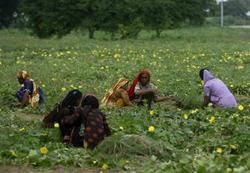 The most worrisome problem agitating the minds of millions of common people in Pakistan today is how long they must bear with the food price inflation that has hit them hard in the past three years. The World Bank report on food inflation estimates that in March this year, food index remained 36% higher than last year. Estimating the short-run poverty impacts of the 2010-11 surge in food prices”, the World Bank estimates that the price increases in the second half of 2010 have increased the poverty head count in Pakistan by 2 percent. The IMF forecast for GDP growth rates and inflation shows Pakistan continues to have double-digit inflation well into next year. Stung by the sharp rises in the cost of living, large sections of the people in both rural and urban areas clearly feel let down by the state. The relentless upsurge of the prices of food items and some other essentials, and the absence of an adequate response from the government, has stoked people’s fears about the future.

The prices of essential commodities, above all, food items such as rice, wheat, pulses, milk, eggs and meat, have gone up by nearly 125 to 200 per cent hitting historic levels over the last three years and have reached record highs during this period. This has reportedly forced the most vulnerable of the poor in some parts of the country to reduce their food intake drastically. There have been food riots in countries across the world where food prices have hit the poor and vulnerable most hard. Twenty four people were killed in riots in Cameroon while in Haiti, protests at food prices forced the Prime Minister to resign. The World Bank has warned that the rising cost of food could lead to political destabilization in 33 countries worldwide including Pakistan. Unfortunately both growth and inflation figures for Pakistan economy are disappointing when compared with other South Asian countries and this also confirms that the economy is more vulnerable to both exogenous and endogenous shocks.

Agriculture is likely to be central to rural development and rural poverty alleviation. Farming has a high potential to create jobs, to increase returns to the assets that the poor possess —their labour and in some cases their land, and to push down the price of food staples — important when so many of the poor are net buyers of food. Its is only small farms that contribute to lower food prices and generates strong growth linkages in the nonfarm economy which in turn help the poor. Agricultural growth that improves productivity on small farms has proven to be highly effective in slashing poverty and hunger and raising rural living standards. Small farms are important players in Pakistan, accounting for significant shares of agricultural output and national employment, hence their future is linked to future possibilities for the agriculture sector. In terms of efficiency, small farms typically make intensive use of land by using much labour — since the costs of supervision of household labour are low. Self-provisioning saves costs of marketing.

Pakistan agriculture is under pressure of the large corporations to change. The real problem is that the investors from the rich countries want access to poor countries’ resources, markets, and labor forces at the lowest possible price. Foreign investors have recently taken over millions of hectares of farmland in Sindh, Punjab and Balochistan provinces of Pakistan for the production of export crops which, according to experts in the field of land utilization, would destroy local agriculture and also lead the country towards severe food insecurity, resulting in increased poverty. The most profound long-term consequence of this land grabbing is the expansion of corporate control over food production. At Government level it is said that the lands are only being leased, not sold, but what is the difference – in terms of the devastation – between being sold outright and leased for 50 or 99 years? These land grabs all drive forward the expansion of a destructive model of industrial agriculture. In Pakistan small-scale agriculture remains the majority activity of the rural sector and the major source of rural employment but, confronted with changes in the wake of globalization, can small farms could survive and can remain the ‘engine for development’, which has been suggested as its pivotal role in national development? And if not, what will be the economic and social consequences? Pakistan is now integrated into a global economic system. Nonetheless, globalization has become painful to the people of Pakistan. It has produced increasing global economic interdependence through the growing volume and variety of cross-border flows of finance, investment, goods, and services, and the rapid and widespread diffusion of technology. Experts are one on the point that corporate farming in Pakistan would lead to food insecurity, hunger and poverty, and convert the country from net food exporter to food importer, alarming signs of which have already become visible.

With the right kind of policy and investments to help them compete, small-scale farmers can make valuable contributions to the growth of our agriculture. They are the only engine of growth that’s available with Pakistan. Land productivity of small farms can be boosted at least twice/thrice compared to the largest ones. Recent history shows that the re-distribution of land to landless and land-poor rural families can be a very effective way to improve rural well-being. In every case of genuine land reform, real, measurable poverty reduction and improvement in human welfare has invariably been the result. This provides a powerful argument that using land reform to create a small farm economy is not only good for local economic development, but is also more effective social policy than allowing business-as-usual to keep driving the poor out of rural areas and into burgeoning cities.

In Pakistan, small farmers can show a tremendous ability to prevent and even reverse land degradation, including soil erosion. The benefits of small farm economies extend beyond the economic sphere. Whereas large, industrial-style farms impose a scorched-earth mentality on resource management—no trees, no wildlife, endless monocultures—small farmers can be very effective stewards of natural resources and the soil. To begin with, small farmers utilize a broad array of resources and have a vested interest in their sustainability. At the same time, their farming systems are diverse, incorporating and preserving significant functional biodiversity within the farm. By preserving biodiversity, open space and trees, and by reducing land degradation, small farms provide valuable ecosystem services to the larger society. The small farm landscape in Pakistan usually contains a myriad array of biodiversity.

The forested areas from which wild foods and leaf litter are extracted, the wood lot, the farm itself with intercropping, agro-forestry, and large and small livestock, the fish pond, the backyard garden, allow for the preservation of hundreds if not thousands of wild and cultivated species. Simultaneously, the commitment of family members to maintaining soil fertility on the family farm means an active interest in long-term sustainability not found on large farms owned by absentee investors. To the productive, economic, and environmental benefits of small farm agriculture, we can add the continuance of cultural traditions and of the rural way of life. If we are truly concerned about rural peoples and ecosystems, then the preservation and promotion of small, family farm agriculture is a crucial step we must take.The loss of small family farms would reduce our supply of safe, fresh, sustainably-grown foods; it would contribute to the economic and social disintegration of rural communities; and be eliminating an important aspect of our national heritage. If we lose our family farmers, we’ll lose the diversity in our food supply, and what we eat will be dictated to us by a few large corporations. Family farms are a valuable resource worth preserving. The Government should avoid providing land to the foreign investors and encourage the local small farmers for rapid poverty reduction and food security in the country.