While millions of people in the Horn of Africa suffer a terrible drought, foreign 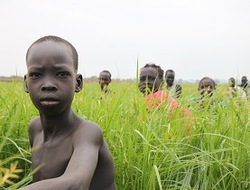 Red and friends work on Karmjeet Singh Sekhon's farm in western Ethiopia (Photo: Philipp Hedemann).
investors are harvesting tonnes of cereals to be exported to Asia and the Gulf states.

swissinfo.ch reports from western Ethiopia on farmland leased by an Indian entrepreneur, where it is not unusual to see young children labouring in the fields.

Kneeling in the middle of a sugar-cane field in blistering 40-degree Celsius heat, a young boy is digging up weeds. An Indian worker stands over him to make sure he doesn’t miss any. Red is eight years old and earns €0.83 (SFr0.96) for a day’s work, less than the cost of using pesticides.

The United Nations says 4.5 million people in Ethiopia are currently in need of aid as a result of a devastating drought. Three million are affected in Somalia, where there are pockets of famine, 3.5 million in Kenya and 120,000 people in Djibouti.

The humanitarian crisis threatens to become worse than the terrible 1984-85 famine which devastated the region and caused the deaths of a million people. Today most emergency food aid is imported.

Meanwhile, Indian tenant farmers are hoping to earn millions by exporting crops grown in Ethiopia. In the world’s twelfth poorest country the race for the country’s most productive agricultural land has only just begun and the social and environmental consequences are immeasurable.

The 68-year-old Indian investor is the manager of a huge farm, which covers an area of ​​nearly 300,000 hectares in western Ethiopia, one of the biggest in the region.

Land rush
Since 2008 there has been an unprecedented rush to secure farmland in Africa, South America and Asia as a result of rises and fluctuations in prices of foodstuffs on world markets and food riots in a number of countries.

Countries including India, China and the Gulf states want to feed their own growing populations but are also looking to position themselves in the race to produce biofuels.

The World Bank says 45 million hectares of farmland were negotiated in 2009 – up from four million a year between 2006-2008. It is estimated that by 2030 another six million hectares will be leased annually in developing countries, two-thirds in sub-Saharan Africa and South America.

“Land acquisitions are a huge risk. The veil of secrecy that hangs over these deals must be lifted so that poor people do not pay the ultimate price and lose their land,” declared Ngozi Okonjo-Iweala, managing director of the World Bank.

Modernise
In Ethiopia 85 per cent of the 80 million population live off the land. But little has changed in the past 100 years and most of the barren fields are still worked using ox-drawn ploughs.

The government hopes that leasing farmland to foreign investors will lead to a wave of modernisation.

According to the Rome-based UN Food and Agricultural Organization (FAO), food production needs a 70 per cent boost between 2010 and 2050 to meet global needs.

Investors seem to have woken up to this fact, however. Agricultural groups like Karuturi Global are blooming. The firm, owned by Ramakrishna Karuturi, is the world’s largest rose producer and wants to become the number one agricultural business. And the Ethiopian government should help.

All Ethiopian land belongs to the state, which hopes to dedicate three-quarters of it to agriculture in the years ahead. This remains an ambitious target as so far only 3.6 million hectares, mainly in the west, has been leased to investors. But with one hectare of land only costing SFr5 a year to rent the situation could change rapidly.

Sold off
Critics say the developing world is being sold off but Ethiopian Prime Minister Meles Zenawi rejects the attacks.

“Those who accuse foreign companies of landgrabbing are ill-informed,” he said. "We do not want to admire the beauty of our country while we starve.”

It is not surprising that the Ethiopian government has become the darling of international agro-business investors.

But local farmers like Ojwato despair. It only takes him a few minutes to cross his one hectare of sugar cane on foot, whilst Sekhon takes several hours to cover his by jeep.

The idea that his neighbour’s harvests are being exported while the country is on the verge of famine makes him angry.

“Foreigners promised to bring electricity, water and hospitals. But in the end only a few of us have worked in their fields and the pay was poor,” Ojwato told swissinfo.ch.

(Translated from German by Simon Bradley)