Down on the farm, investors see big potential 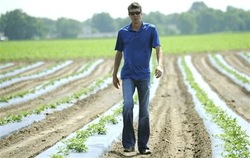 Braden Janowski, a software executive, walks through a field in Niles, Mich., part of a 430-acre farm he invested in. Janowski has never planted seeds or brought in a harvest; he doesn't even own overalls. (Photo: Joe Raymond  /  AP)

NEW YORK — Braden Janowski has never planted seeds or brought in a harvest. He doesn't even own overalls.

Yet when 430 acres of Michigan cornfields was auctioned last summer, it was Janowski, a brash, 33-year-old software executive, who made the winning bid. It was so high — $4 million, 25 percent above the next-highest — that some farmers stood, shook their heads and walked out. And Janowski figures he got the land cheap.

"Corn back then was around $4," he says from his office in Tulsa, Okla., stealing a glance at prices per bushel on his computer. Corn rose to almost $8 in June and trades now at about $7.

A new breed of gentleman farmer is shaking up the American heartland. Rich investors with no ties to farming, no dirt under their nails, are confident enough to wager big on a patch of earth — betting that it's a smart investment because food will only get more expensive around the world.

They're buying wheat fields in Kansas, rows of Iowa corn and acres of soybeans in Indiana. And though farmers still fill most of the seats at auctions, the newcomers are growing in number and variety — a Seattle computer executive, a Kansas City lawyer, a publishing executive from Chicago, a Boston money manager.

The value of Iowa farmland has almost doubled in six years. In Nebraska and Kansas, it's up more than 50 percent. Prices have risen so fast that regulators have begun sounding alarms, and farmers are beginning to voice concerns.

Buyers say soaring farm values simply reflect fundamentals. Crop prices have risen because demand for food is growing around the world while the supply of arable land is shrinking.

At the same time, farmers are shifting more of their land to the crops with the fastest-rising prices, which could cause those prices to fall — and take the value of farms with them. When the government reported June 30 that farmers had planted the second-largest corn crop in 70 years, corn prices dropped 8 percent in two days.
And even if crop prices hold up, land values could fall if another key prop disappears: low interest rates.

When the Federal Reserve cut its benchmark rate to a record low in December 2008, yields on CDs and money market funds and other conservative investments plunged, too. Investors were unhappy with earning less, but they were too scared about the economy to do much about it.

As they grew more confident — and more frustrated with their puny returns — they shifted money into riskier assets like stocks and corporate bonds. To many Wall Street experts, this hunt for alternatives also explains the rapid rise in gold, art, oil — and farms.

Those who favor farms like to point out that, unlike the first three choices, you can collect income while you own it. You can sell what you grow on the farm or hand the fields over to a farmer and collect rent.

In Iowa, investors pocket annual rent equivalent to 4 percent of the price of land. That's a 60-year low but almost 2.5 percentage points more than average yield on five-year CDs at banks. That advantage could disappear quickly. If the Fed starts raising rates, farmland won't look nearly as appealing.

For now, though, investors can't seem to get enough of it.

At a recent auction of 156 acres in Iowa, the 50 or so farmers who showed up withheld their bids out of respect for a beloved local farmer who had rented the land for two decades and wanted to own it. But his final bid of $1.1 million was topped by a California insurance executive. In Iowa, 25 percent of buyers are investors, double the proportion 20 years ago.

"They were angry, but what are they going to do about it?" says Jeffrey Obrecht of Farmers National, the brokerage that ran the auction. He told the farmers they shouldn't worry because some of the new investors will find a new way to make money in a few years and start selling their land.

Other dangers lurk for investors. In Iowa, corn prices are high partly because corn is used to make ethanol, a fuel additive subsidized by the federal government. The U.S. Department of Agriculture expects 40 percent of the nation's corn crop this year will go to factories that make it. But with Washington running up record deficits, it's anyone guess how long the subsidy will remain.

As with stocks, U.S. farms can swing wildly in value along with the economy. Despite the fragile recovery, though, farm prices are nearing records now, capping a decade of some of the fastest annual price jumps in 40 years. In Iowa, farm prices rose 160 percent in the decade through last year to an average $5,064 per acre, according to Iowa State University.

Concern that farm prices may be inflated is serious enough that the Federal Deposit Insurance Corp. held a conference for farm lenders in March titled "Don't Bet the Farm." Thomas Hoenig, head of the Federal Reserve Bank of Kansas City, oversaw dozens of bank failures when a farm boom turned bust 30 years ago. Today, he suggests prices may be in an "unsustainable bubble."

Veteran bond trader Perry Vieth doesn't think so. Vieth, the former head of fixed income investments for PanAgora Asset Management in Boston, started buying farms with his own money five years ago, when buyers with no farming experience were rare.

"Agriculture was sleepy," he says. "People looked at me like, 'What are you doing?'"
Now he's buying for 71 wealthy investors. Ceres Partners, his 3½-year-old private investment fund, owns 65 farms, almost half bought since November. He says he's returned 15 percent annually to his investors overall.

Though Vieth says prices in some places have climbed too high — he won't buy in Iowa, for instance — he says the price of farms elsewhere will rise as big money managers start seeing them as just another tradable asset like stocks or bonds and start buying.

"When Goldman Sachs shows up to an auction, then I'll know it's time to get out," he says.

Janowski, the Tulsa software executive, is bullish for other reasons. A self-described serial entrepreneur, he has built four companies, including a software developer that he sold for $45 million three years ago.

Listen to him speak, though, and you'd think he was an economist. He'll talk your ear off about how inflation could rage out of control, and how farmland is more likely to keep up with inflation than other assets. Janowski sold all his stock in April.

He plans to move most of his money into farms and has clearly done his homework. In the past five years, he has flown to more than a dozen farms up for sale, often with an agronomist in tow. Before bidding on that Michigan farm last summer, he visited five times to walk the property, which includes a house and land for commercial development as well as tillable fields.

The day of the auction, which drew more than 100 bidders to the Century Center in South Bend, Ind., he didn't leave anything to chance. Janowski arrived two and a half hours early to get a seat near the entrance so he could size up rival bidders as they walked in.

Then he kept quiet as an auctioneer carved the farm up into lots numbered 1 through 40 and began taking bids for each. After 30 minutes, Janowski broke his silence with an offer to buy the whole thing: "One through 40 ... $4 million." For the tillable parts, he figures he paid about $6,000 an acre.

"I'm probably on the fringe of being a nut job," he says. "But as each month goes by, I become less nutty."