US Investors want a 72,000 hectare palm oil plantation in the middle of the rainforest 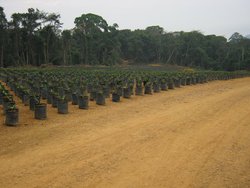 
Naturefund, Rettet den Regenwald, Rainforest Foundation UK SAVE Wildlife Conservation Fund and other groups warn that plans are already underway to clear out the biologically-rich rainforest in Southwest Cameroon.

"[It] will be an environmental disaster for the rainforests in Cameroon; even worse than the planned highway through the Serengeti. The oil palm plantation will further fragment this unique landscape, restricting the natural movements of many animal species," says SAVE in their new facebook campaign "Stop Blackstone Deforestation in Cameroon".

"In [the Cameroon] landscape are several protected areas, including Korup National Park, Bakossi National Park, Banyang Mbo Wildlife Sanctuary, and Rumpi Hills Forest Reserve. These protected areas represent a stronghold for many endangered, unique species. If they are lost from these areas, they will likely be lost from this world forever. This oil palm plantation will further isolate these protected areas and increase bushmeat hunting pressure. Hunting for bushmeat, the meat of wild animals, is already driving large-bodied mammal species to extinction. This oil palm plantation will lead to increased bushmeat hunting and decimate forests and wildlife," continues SAVE.

With a combined population of about 45,000 the Baka, Bakola, Bedzang and Bagyeli live in 38 small villages along the edge of the protected areas of the rain forest. They are heavily dependent on its resources for subsistence.

In a strange and disturbing twist, their subsistence way of life is being used as a selling point for the new plantation project. The NGO "All for Africa" champions the plantation as "Development Assistance". All for Africa asserts that it will be a "lasting development project" that will bring thousands of new jobs to the Indigenous population.

"Experiences from Asia show however: that is usually a deception," says SAVE. "After the large companies remove the tropical wood, nothing remains for the rural population [but] rooted out surfaces. On the plantations they work... at best... for exploitative low wages."

In this case, the deception runs a little bit deeper. "All for Africa" was founded by none other than Bruce Wrobel, the Managing Director of Sithe Global. Wrobel is also the founder of Herakles Capital Corporation.

It's corporate green-washing at its best. After all, when an "eco-friendly" NGO like All for Africa steps in to support the plantation, than it must be good, right?

Well, no amount of green-out can cover up the fact that 72,000 acres of pristine rainforest is about to be ripped from the Earth's surface, severely impacting the rainforest's biodiversity and destroying the ancestral lands and livelihoods of the Baka, Bakola, Bedzang and Bagyeli.