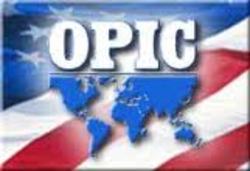 WASHINGTON, D.C. – The Board of Directors of the Overseas Private Investment Corporation (OPIC) approved nearly $500 million in financing for five new investment funds that could ultimately invest more than $1.5 billion in the renewable resources sectors of South and Southeast Asia and Africa, helping the fast-growing economies of the former to manage their environmental challenges, and the latter to enhance its farming sector.

The new funds fulfill a pledge made by OPIC President Elizabeth Littlefield at the UN Climate Change Conference in Cancun last December, when she announced that OPIC would provide at least $300 million in financing for new private equity investment funds that could ultimately invest more than $1 billion in renewable resources projects in emerging markets.

The two Africa-related funds also support Feed the Future, the Obama Administration’s global hunger and food security initiative, by which the U.S. Government is helping countries transform their own agricultural sectors to grow enough food sustainably to feed their people. President Obama has pledged at least $3.5 billion to the initiative.

“The impressive response OPIC received to its call for proposals, and the creation of these five new investment funds, demonstrate that the development of renewable resources is not only an urgent global need but also a significant investment opportunity,” Ms. Littlefield said. “These funds will provide much-needed capital to the frontier economies of South and Southeast Asia, which face significant environmental challenges; and to the farming sectors of sub-Saharan Africa, which can benefit greatly from increased investment.”

In Cancun, the U.S. and other developed countries confirmed a commitment to scale-up climate finance to developing countries, both in the short and long term, in the context of meaningful and transparent mitigation actions.  In addition to climate assistance programs administered by USAID, U.S. Department of State and U.S. Department of the Treasury, OPIC also is at the forefront of U.S. climate finance initiatives.

“This is exactly the kind of public-private collaboration we need to get significant clean energy funds flowing to developing countries,” said U.S. Special Envoy for Climate Change Todd Stern.  “OPIC is one of the most innovative and effective U.S. government agencies in delivering climate finance while leveraging private investment.”

OPIC will provide up to $136 million in financing to this fund, which will invest in climate solutions centered around renewable energy generation, recycling, and energy efficiency, specifically in India and Southeast Asia. It will primarily target small and medium-sized enterprises (SMEs). The fund has a target capitalization of $420 million.

Specifically, the fund will provide capital to companies with proven technologies and products to tackle the environmental challenges faced by the region’s high-growth economies. Aloe intends to invest in several companies at the growth/expansion stage which will include renewable energy projects such as hydro, wind, and waste recycling.

OPIC has approved $62 million in financing to this fund, which targets renewable energy projects and project developers in Asia, primarily India and the Philippines. The fund focuses on mature renewable technologies, such as wind and small hydro, to help close the sizeable electricity demand-supply gap in its target markets. The fund currently has $125 million under management, which would increase to $187 million with the OPIC financing.

With recent deregulation in India and the Philippines, there has been a rapid increase in investment opportunities in the renewable sector, as developers and states have sought to advance projects, but they often lack the capital, structuring experience, and operational expertise to take projects from the development stage to the operational stage. The fund is designed to help mitigate that funding and expertise gap.

The fund manager is Berkeley Energy, with a presence in Delhi, Manila, and London, whose principals have delivered on more than 115 renewable energy projects and over 70 conventional energy projects across emerging and developed markets.

OPIC will provide up to $50 million in financing for the Mekong Renewable Resources Fund (MRRF), which will invest in renewable resource opportunities in the Lower Mekong countries of Vietnam, Cambodia and Laos, specifically in the environmental services and infrastructure; renewable energy; and energy efficiency sectors. Within each target sector, the fund may also invest in emission reduction projects and/or emission neutral projects. MRRF will primarily invest in SMEs. Its target capitalization is $150 million.

MRRF will be managed by Indochina Capital Corporation, a Vietnam-based asset management firm founded in 1999 and managed since its inception by two American citizens.

OPIC will provide up to $100 million in financing for the AAF, which will focus on food production in Africa by investing in the primary (farms and plantations) and secondary (processing and animal feeds) farming sectors, and in the agricultural services and infrastructure sectors. The Fund has a target capitalization of $300 million and achieved a first closing at $151 million in January 2011.

Specifically, the Fund will seek to invest in commercial farming operations with expansion potential, and to bring modern management skills to those operations in order to improve performance. Management will also engage appropriate local indigenous partners and communities. Where appropriate, out-grower schemes will be developed to support neighboring local farmers and provide technical assistance.

The Fund Manager is Phatisa, established in 2005. Phatisa team members have a successful track record investing, managing and exiting food and agribusiness investments across the African continent.

OPIC will provide up to $150 million in financing for this fund, which will invest in companies in the agricultural sector in the following sub-Saharan African countries: Malawi, Mozambique, South Africa, Tanzania, Uganda, and Zambia. The Fund will invest across the value chain in the agricultural sector but with a focus on farmland/primary production businesses. Targeted farmland investments will likely include grains, soya, fruits, vegetables, sugar, tea, and coffee. The fund has a target capitalization of $450 million.

The fund will aim to improve the management of farms using a hub-outgrowers model, which involves the close cooperation between neighboring small-scale farmers and an existing commercial farm. Commercial farms will function as hubs where local small-scale farmers can receive crop inputs, education, technical assistance, and compensation for their harvest. The fund’s goal is to reach 100,000 small farmers in each country of operation over ten years, which would lead to an estimated incremental increase in total food production of 2.8 million tons per year.