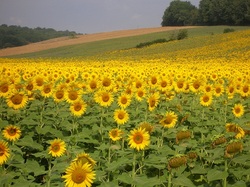 Romania has become the land of all opportunities for those seeking to buy …fertile land. Romanian officials have started to express worries about an increasing number of foreign companies buying agricultural land in Romania.

“I am worried about the interest of foreign companies towards Romanian land. The legislation should impose some barriers. Land is cheap, there is a risk we end up with a lot of foreign landlords. We should go more for concession rather than for selling land,” said Foreign Affairs Minister Theodor Baconschi.

Following discussions with his counterparts from different countries, Minister Baconschi said he realized there is a quest for fertile land, which doesn’t go only from China to Northern Africa, but from the Gulf to Eastern Europe as well. There are countries where the technology is developed but which face food and water shortages and which would like to invest in the agricultural production in Romania, said Baconschi.

On the other hand, agricultural land is not seen with good eyes by Romanians themselves, many of which, mostly those who live in cities, consider agriculture to be a thing of the past.

A hectare of agricultural land can cost up to EUR 2,000 in Romania, while the costs of a similar plot of land can go up to as much as EUR 50,000 in the Netherlands, for example, according to Romanian media.