In Sudan's breadbasket, a revolution is waiting to happen 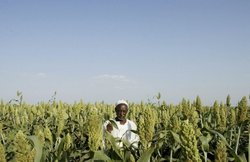 A Sudanese farmer stands in a field of sorghum in Gezira state (Photo: AFP/File, Jose Cendon)

WAD MADANI, Sudan — Standing in a green field near the banks of the Nile, Al-Hajil Maamun says he struggles to make a profit from his farm despite the potential of Sudan's fertile heartland and the high hopes of the government.

Agriculture has become something of a Holy Grail for cash-strapped Khartoum as it seeks to diversify its economy. Its oil income -- which accounts for more than 90 percent of hard currency earnings -- is set to plummet with the independence of the south, on July 9, where some 75 percent of the reserves lie.

Farming was a mainstay of Sudan's economy before oil exports started at the end of the 1990s, and senior government officials insist on the sector's ability to minimise the economic impact of southern secession.

But disgruntled farmers in Gezira state -- home to one of the world's largest irrigation projects, between the Blue and White Nile rivers -- do not bear witness to Sudan's would-be agricultural revolution.

Nor does the fact that Sudan had to hike sugar prices by 15 percent in January because of the punitive cost of subsidising imports of a commodity that it could be exporting.

"The farming situation is worse than 10 years ago because costs have tripled and there is no research into improving production or help with marketing," said Maamun.

Over the winter, the 50-year-old farmer sold 12 trucks of tomatoes and made a net profit of just 200 Sudanese pounds (62 dollars, 42 euros) because, he says, of low seasonal prices, soaring production costs and the lack of government support.

To breathe new life into its agricultural sector and boost output, Sudan is desperately seeking foreign investment, especially from neighbouring Arab countries such as Egypt and Saudi Arabia which are nervous about their future food security.

The jewel in the crown of the once-prosperous industry is known as the Gezira scheme, the vast but neglected farming project with its network of irrigation canals spanning 840,000 hectares (two million acres) between the two Niles.

"Now we are planning for 200,000 feddans (84,000 hectares) of sugar cane -- 10 percent of the whole Gezira scheme -- and we are looking for foreign finance to help with this plan. The irrigation system is in place. The land is available. Water is available. We only need the capital."

Sudan is in talks with Egypt over proposed investment in Gezira and White Nile state, announced when a high-level delegation including the agriculture and irrigation ministers visited Khartoum in March.

"Egypt wants to have cattle meat and sugar beet... They are going to invest in the future. But the details have not yet been decided," Simsaa said.

The Gezira scheme's chief acknowledged the "very low yield" of Sudan's agricultural production, but blamed this on the high cost of imports, saying that farmers could not afford the fertilisers and other materials needed to raise output.

But some argue that the project's stagnation is essentially the result of corruption and mismanagement. These critics doubt whether the Sudanese government is capable of salvaging it, and warn of rising discontent among the 130,000 farmers it employs.

In recent months, farmers have staged sporadic demonstrations against what they consider an unacceptable offer by the government to buy their land. Some have degenerated into violent confrontations with the police.

"The farmers are complaining, because the price they are being offered for their land is not fair," said lawyer and political activist Majdi Selim, speaking at his office in Wad Madani.

A revered Sufi sheikh based in Gezira goes further, blaming the regime in Khartoum for bankrupting Sudan's entire farming system and accusing the police who clashed with the farmers of treating them very badly.

"Sudan is an agricultural country but most of the people are now hungry because they cannot cultivate, there is no water in the channels, the government sold all the tractors that would prepare the land and the people have no money," Sheikh Abdullah told AFP.

"Islam calls for fraternity, equality, freedom and justice, which is all absent now."