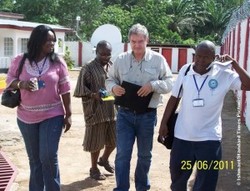 As a result of a so-called independent report on the Addax bio-energy sugarcane to ethanol project in the Makeni region that was issued by the Bread for All in collaboration with the Sierra Leone Network on the Right to Food (SiLNoRF) and also the report of Standard Times environment urging the Environment Protection Agency to intervene and come out with facts about the issues raised, a full force delegation headed by the erudite EPA Executive Chairperson, Madam Haddijatou Jallow has visited the Addax operational areas and got first hand information from the community people. In other to ensure transparency on the environmental monitoring process at the sites, Madam Jallow requested the presence of a delegation headed by erudite EPA Chairperson, Haddijatou Jallow at the Addax site being escorted by Addax HSSE MAnager, Mr. Derek Higgo of Standard Times Environment Reporter, Ishmael Kindama Dumbuya, EPA Deputy Director for field Extensions and Operations, Syl-Brains Kamara,  head of Network Movement for Justice and Development in Makeni, Joseph Pokawah and SiLNoRF representative Lansana Sowa. The monitoring mission took place on the Saturday 25th of June 201.

Some of the key environmental issues and allegations in the report were that the right to water was hindered, the water bodies are disappearing as a result of the activities of Addax to name a few.

Although the delegation did not visited all the more than 70 communities within the Addax operational areas, but the monitoring delegation visited communities such as Lungi Akan and Romaru Village as well as the Addax office along the Magburaka Highway. The Lungi Akan community is composed of more than five hundred people. The community main source of livelihood is agricultural farming from their lands.

The EPA deputy Director for operations and field extensions, Mr. Kamara before briefing the community representatives on the essence of the visit and also highlighting some of the issues raised on the report, first called for the presence of elders, the youths and the women so that they can get independent and collective voices from the village on how Addax activities are affecting them. To avoid intimidation, addax representatives were excluded from the process.

Mr. Kamara said the role of the Environment Protection Agency is to monitor activities of companies coming into the country and force them to succumb to ethical and clean environmental activities adding that with the establishment of the EPA, companies are now thinking and working the Environment and Social Health Impact Assessment. He said as their aim is to collect first hand information about the activities of the addax bio-energy company, they were not there to destroy or cause any disagreement with addax and the villages but to look into grievances and able to settle them amicably through compromise and negotiations.

Madam Jallow urges the community people to also say out their grievances so that they can be heard especially when the country is now interconnected with advance means of communication while also stressing the need for settling dispute and grievances rather than causing problems for them.

To be candid enough, some of the community people condemned addax; some praised them while some also urge the bio-energy and ethanol company to do more for the people in their operational areas. Pa Brima serry Kamara land owner in Lungi Akan said that when the company came they told the community to give them land and once this is done they will reap the benefit of giving their land.

PA Serry Kamara accused the company that there is no employment for their children after at the earlier stage promised to offer job facility for their children. Although there may be some of the skilled labors to be hired by the company which the villages may not have, there is an agreement between the community and the Addax Company to always consult the company when they wanted workers. The community representatives unanimously agreed that despite Addax is helping them in some ways; the company still needs to offer them some of the essential services that will help in community development such as schools, community center, clinic, dug water well etc.

At the Romaru Village, there is no clean water to drink except the dilapidated hand pump constructed for them over ten years ago. According to the community people in the village, there source of water has been destroyed and they cannot get clean water from their streams because the company has polluted their sources of water.

The delegation after monitoring the villages and being satisfied with and seen some of the allegations made in the report then proceeded to the Addax office along the Magburaka highway.

There was a tough deliberation inside the Addax offices with the EPA Chairperson, Madam Jallow hitting on the interest of the country and the communities while the Addax Health Safety Social affairs and Environment Manager, Derek Higgo was desperately defending the company. Madam Jallow after presenting the findings of the delegation to the management and staff of Addax Bio-energy reminded the company on their role to meeting to the needs of the Community Development Action Plan in making sure that the villages or communities are developed with some kinds of social activities. Mr. Derek denied including the issue of building or providing schools or health clinics for the said communities and commented on the s2000 jobs they are going to provide for the communities and the $US4M year employment expenditure.

The Environmental and Social Management Plan set by the Addax in their ESHIA they shall “set standards and guidelines to ensure that surface water abstraction does not impact on the historical base flow of the river and to achieve ecological water requirements” and in the company Community and Skills Development Plan, “Management strategies to deal with the mitigation of negative social impacts and optimization of positive ones must be developed”. Their Community and Skills Development plan also need to deal primarily with managing social externalities, development programs, development opportunities and community livelihoods.

Madam Jallow spoke with all authority that although they must come to Freetown and check out their CDAF, the company must make sure that they do something for the benefit of the communities so that the company itself can have something to boast of in the future. She said that it was based on the license they gave the company that it able to source funding to operate in the country.

After thorough discussions and objective augments, promised to address the problems at the Maronko and the other villages. Madam Jallow called for the company to provide bore holes in all the villages the company is operating. Madam Jallow promised that the Environment Protection Agency will make another visit in the community and the company headquarters after a period of one month.

In an interview with Lansana Sowa, he said he has nothing against the company but the only thing is that the Addax Company needs constant monitoring for them to fulfill their obligations to the communities and the country. He said he holds no grudge against Addax adding that he is impressed with the outcome of their report for the fact it moved an agency like the EPA to investigate.