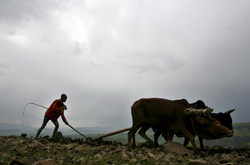 Foreign investors, with the World Bank, are acquiring vast tracks of land in Africa - at the expense of local farmers.

The "town" chief of the village seemed to be in a state of shock.

Sitting on the front porch of his mud and thatch home in Pujehun District in southern Sierra Leone, he struggled to find words that could explain how he had signed away the land that sustained his family and his community.

He said he was coerced by his Paramount Chief, told that whether he agreed, or not, his land would still be taken and his small oil palm stand destroyed. He didn't know the name of the foreign investor nor did he know that it planned to lease up to 35,000 hectares of farmland in the area to establish massive oil palm and rubber plantations.

Haltingly, he said that without his land, he might as well take his leave of the village. By that he meant that he was as good as dead.

This is a ground-level view of a large land deal in Africa, where in recent years foreign investors have acquired tens of millions of hectares of farmland. In 2009 alone, the World Bank estimates that around the world foreign investors acquired about 56 million hectares of farmland - an area about the size of France - by long-term lease or by purchase. Farmland has become a favourite "new asset" class for private investors; "like gold, only better" according to Capital & Crisis.

The World Bank has its own term for the new global land rush. It calls it "agro-investment" and has developed seven voluntary principles to make the land deals "responsible".

Critics of the phenomenon - farmers' movements, human rights, civil society, women's and environmental organisations, and many scientists - call it "land grabbing". They say there is no way that the taking over vast areas of smallholder farmland and transforming it into giant industrial plantations and agribusiness operations can ever be "responsible".

They argue that land grabs are throwing millions of farming families and indigenous peoples off their land. They say that it's not just land that's being grabbed, but also precious water resources.

The investors are hedge funds, private equity funds (that are attracting even prestigious American universities with their promises of high returns), pension funds, banks, multinational corporations, and sovereign wealth funds seeking to sow capital and grow profits. They are also Middle Eastern and Asian nations anxious to secure their own future food security in the face of climate change, with dwindling water resources and arable land.

An estimated 70 per cent of the demand for farmland is in Africa, where land is cheap and traditional communal ownership makes people particularly vulnerable. Sometimes this can be done for the cost of a few gifts to traditional chiefs and grandiose promises of bringing "development".

Since 2009, in the wake of the food, fuel and financial crises of 2007-2008, the rush for farmland has only accelerated. But it's impossible to know just how much more of Africa's fertile land has now been taken by investors.

Recent in-depth research by the US-based Oakland Institute of land deals in seven African countries found that most of the land deals lack transparency, making it almost impossible to calculate their total area. Lack of transparency is a great enabler of corruption.

Yet "transparency, good governance, and a proper enabling environment" is one of the seven principles laid out by the World Bank for "responsible agro-investment". The Oakland Institute found that most of the land deals do not respect any of these principles.

This is ironic, to say the least.

More than any other institution or agency, the World Bank Group has been promoting direct foreign investment in Africa, and enabling the farmland rush. Its private sector arm, the International Finance Corporation (IFC), with its Foreign Investment Advisory Service and its program to Remove Administrative Barriers to Investment, has been working - often behind the scenes - to ensure that African countries reform their land laws and fiscal regimes to make them attractive to foreign investors.

The investment promotion agencies are developing and advertising a veritable smorgasbord of incentives not just to attract foreign investment in farmland but also to ensure maximum profits to investors. These include extremely generous tax holidays for 10 or even 30 years, zero per cent duty on imports, and easy access to very large tracts of land, sometimes over 100,000 hectares. Investors may pay just a couple of dollars per hectare per year for the land, and in Mali, sometimes no land rent at all.

The Sierra Leone Investment and Export Promotion Agency, boasts about the extremely low labour rates and flexible labour laws in the country and about other privileges it accords investors - 100 per cent foreign ownership in all sectors, full repatriation of profits, dividends and royalties, no limits on expatriate employees.

Such giveaways cast doubt on claims by African governments, and others trying to defend the land deals, that this kind of "agricultural investment" will solve unemployment, generate revenue for cash-strapped governments, reduce the dependence on aid, and bring economic development.

In this race to the bottom, African governments are also encouraged by the World Bank Group to outdo each other when it comes to protecting investors. Each year, it grades African on investor protection in its "Doing Business" report cards, praising countries that move up in the rankings in what an IFC official admits is a "horse race".

This means that low-income and food-deficit African countries, some still struggling to rebuild after long conflicts, such as Sierra Leone and Liberia, find themselves competing with each other to offer foreign investors ever sweeter deals on their arable land, so desperately needed for local food production.

The investment promotion agencies quote figures for the vast amounts of "uncultivated" or under-utilised" land in their countries, often without offering any recent land use studies to back up these figures or a thought for the millions of people who depend on that land for their livelihoods.

Nor do they take into consideration the crucial importance of small family farms, which employ more than half the people and produce 80 per cent of the food on the continent. Smallholder farms tend to be extremely biodiverse, involving fallow periods to protect and restore soils and water resources.

Not in Africa to help

Conspicuously absent in the talk about the purported benefits of the land deals is serious discussion of protection of local people, human and environmental health, water resources, biodiversity, human rights, food security, and free prior informed consent of the affected communities.

As the Oakland Institute research shows, many of the land deals are for enormous plantations of palm oil and sugarcane for agrofuels, or for the production of cut flowers and a handful of staple crops - all for export.

The United Nations Food and Agriculture Organisation has just released a "new paradigm" for agriculture, called "Save and Grow". Echoing other recent major studies, it finds that agro-ecological agriculture that emphasises conservation of soil and water resources and reduced use of agrochemicals can "enable low-income farm families in developing countries - some 2.5 billion people - to maximise yields and invest the savings in their health and education."

And yet this unsustainable industrial agricultural model is the one being promoted by many African governments, donor agencies and foreign investors.

African farmers, left high and dry by their own governments during the decades of austerity programs imposed by the World Bank and the International Monetary Fund, do need investment and support. They desperately need decent roads and access to local markets, processing equipment to add value to their own diverse farm produce, storage and drying facilities to prevent post-harvest losses, and basic amenities such as schools and health centres and water wells to improve rural lives, so that farming communities can thrive.

But foreign investors are not in business to provide any of these things. They are not in Africa to help impoverished African farmers improve their own farms, or to combat hunger. They are far more likely to destroy the family farm in Africa and aggravate hunger, all in the name of economies of scale, a global corporate food chain, and profits.

The same actors - the speculators, bankers, unregulated investors - who have had a hand in inflating food prices and bringing the global economy to its knees are now consolidating control of global food production and of land, to profit from the very crises they provoked.

It is beyond tragic that so many of them have set their sights on the new "asset class" of African farmland - which is the very asset on which hundreds of millions of Africans depend for their livelihoods and their survival.

Joan Baxter is a Senior Research Fellow with the Oakland Institute and author of its investigative reports on land deals in Sierra Leone and Mali. She is a journalist, award-winning author, and development researcher who has lived and worked in Africa for more than 25 years.

The views expressed in this article are the author's own and do not necessarily represent Al Jazeera's editorial policy.