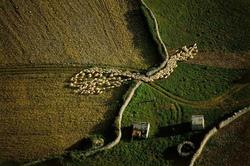 TUNIS: Tunisia expects a grain harvest of more than 2.1 million tons this year, including 1.2 million tons of durum wheat, and is to offer some 10,000 hectares of farmland to foreign investors, a minister said.

Agriculture Minister Mokhtar Jalouli said the end of the rule of Zine Al-Abidine Ben Ali was a chance for Tunisia to end corruption and introduce transparency, making the country more attractive to investors.

“It is clear we have a good grain harvest this year... It may exceed 2.1 million tons during this harvest season, which is going well,” Jalouli said.

The figure of 2.1 million tons for 2011 is an increase on estimates earlier this year of 2 million tons.

Jalouli said Tunisia would need to import only around 0.6 million tons of grain this year to meet domestic needs for its population of more than 10 million.

He also said Tunisia, where an uprising brought down Ben Ali’s 23-year rule in January, hopes to lease about 10,000 hectares of farmland to foreign investors by September 2011.

“About 10,000 hectares of land will be leased to foreign investors... We will open the offer by the end of next month, and then consider the demand, but it should be soon because the agricultural season starts in September,” he said.

It was the first time Tunisia had made a public announcement like this on leasing land.

Tunisia hopes to use the profits from leasing land to support job growth and exports, Jalouli said.

The farming sector — often hit by drought in the dry Sahara region — accounts for around 12 percent of Tunisia’s gross domestic product and 11 percent of Tunisian exports. It is also the main employer in Tunisia.

Jalouli foresaw major foreign investments in agriculture, including in the poor Sidi Bouzid area where the Tunisian uprising began last December. Many areas of south Tunisia and in the interior on the edge of the Sahara are underdeveloped.

“A German-Turkish company will be completed during the coming period to carry out five projects for canning fruits in Sidi Bouzid... they will provide more than 1,200 jobs in the town,” he said.

He said he was confident of large investment flows from Europe, China and the GCC region as the government stamps out corruption.

Jalouli said the army had been careful to protect agricultural zones after Ben Ali left. The ministry says regularly on state television that it will take tough measures against anyone found destroying crops — reflecting a fear that Ben Ali supporters could target the sector.

“Fire has consumed an estimated 100 hectares area this year, which is normal,” Jalouli said.