Selling off the farm? 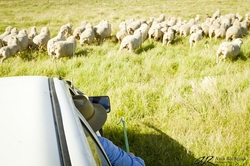 There is nothing new about foreign investment in Australian agribusiness. It's been going on for over 200 years. Many investors create something new, something not tried before. It may be a different approach to management, the use of new technology or crop varieties, better handling of produce, consolidation of smaller properties and larger scale operations or new markets and new competition.

These are the ingredients which improve agribusinesses. Australians are quick to learn and apply new ideas and new ways. Those that don't either get out or are pushed out of business because they find it less profitable or impossible to compete with successful innovations. Other are only too happy to sell their land, especially at above market price.

Some farmers can become set in their ways and unwilling to change. Others may resent and resist foreign investment, declaring that we are selling off the farm. They call on government to protect the national interest by limiting and imposing greater control on foreigners buying up agricultural and pastoral land. Warding off competition some may say, but when their calls are echoed by farmers who have no intention of leaving the land, we should at least have a look at what is going on.

What we find is that a number of things are happening which have not occurred before. Land and established agribusinesses are now being purchased to:

These are acceptable practices because they are either condoned or approved by government. Whether they meet with public approval is quite another matter.

China is actively purchasing agricultural land in a number of countries, including Australia, seemingly to ensure a food supply for its large (1.2bn) and growing population. It is said this measure is made necessary because of expected effects of climate change on its own agriculture.

Those effects are predicted to include reduced water flows for agriculture due to melting of glaciers which feed its major rivers. They also include reduced rainfall over significant parts of China where crops are grown for domestic consumption and loss of agricultural land due to inundation from rising sea levels later this century. Combined, these are expected to significantly reduce China's capacity to produce food or feed its population by 2100.

China is unique among foreign investors in Australian agriculture in that land purchases are being made by Chinese government controlled organizations, not by the private sector. This means that the Chinese government is able to (and will) determine how the land is to be managed, the crops which are to be produced, to whom they are to be sold and, if to China, at what price.

The government of China will no doubt have been advised that it is not buying any kind of sovereign right over its land acquisitions. They remain an integral part of the State in which they are located and use of the land is subject to compliance with State and Federal laws. Any dispute in these matters would of course be settled in our courts. There is no indication that China does not recognize this or that it would seek by other means to enforce any ideas of sovereignty over its land acquisitions.

China may feel that the use of its land is first and foremost to supply its home market with food, rather than meet any food shortages in Australia. China may also feel that it has the right to export food grown on its land at a price determined by it. This would enable their farms to set export prices at cost of production while charging market prices in China – in other words price transfer enabling their Australian farms to operate without paying tax in Australia.

These and other areas of potential conflict need to be clearly spelt out to the Chinese government now. This will not stop future demands being made by China but at least there will be clear, if not fully accepted, understanding of the extent and the non-negotiability of Australian sovereignty.

There is no limit to the number of properties which may be purchased by foreign interests, though sale of land for $230m or more does require Australian government approval. Approval is usually given, or withheld, on the basis of a recommendation of the Foreign Investment Review Board (FIRB). The Board considers the views of State government, farmers' and other organizations and individuals before making a recommendation to government.

It has been asserted by some that FIRB involvement should occur when the proposed purchase exceeds $100m. or involves an area in excess of 5,000 hectares. Others have suggested that purchases made by Chinese interests should be subject to the same or similar conditions which would apply to foreign investment in China. To date, neither Federal nor State governments have shown interest in adopting such measures.

Less common is the purchase of land by foreign interests so that they can undertake mining operations on the land. This enables mining to proceed, subject to government approvals, without objections from land owners hostile to such operations, or litigating for damages arising from pollution beyond the mined area.

One such case involves the purchase of 65 properties covering an area of 19,000 hectares of rich agricultural land near Gunnedah on the Liverpool Plains of NSW. So far, 25 properties have been acquired at a cost of $130m. by Shenhua Watermark Coal, a company wholly owned by the Chinese government. Prices paid so far have mostly been above market valuation.

The purpose of these acquisitions is not food production but to conduct coal mining with product being shipped to China. The Chinese government will, through its wholly owned subsidiary determine the rate of coal production and sales price should mining proceed. The concern of farmers is three-fold. It takes fertile farmland out of production, could pollute neighboring farmland and may pollute the aquifer used by farmers.

Those concerns would arise irrespective of the nationality of the mining company. They would be addressed by State and Federal laws, particularly those relating to protection of the environment and on-going inspection to ensure strict compliance with imposed mining conditions would apply. With these protections foreign investment in the mining industry in generally welcome.

However, there are exceptions where it can be argued that FIRB examination and ministerial approvals should apply. For example foreign investment and control of mining and export of rare earth minerals, particularly by a government, should not be permitted without FIRB review and Ministerial approval. This arrangement currently applies to all large foreign investment in mining.

Many companies, some very large, others relatively small, provide infrastructure for the purchase, processing, storage, packaging and transport of agricultural, livestock and fisheries products. They provide vital services for primary producers, providing them with the orderly and speedy marketing services needed for successful commercial operations.

Some primary producers are concerned that many of the larger companies on which they depend have recently been sold to overseas groups. Their concern is based on the suspicion that the new owners will conduct their Australian businesses with primary regard to their overseas based operations, rather than the needs of Australian farmers.

Queensland based Australia Meat Holdings operates 10 abattoirs, 5 huge cattle feedlots and is the largest meat processor in Australia. It processes 1.5m head of cattle, employs a workforce of 4,900 and exports 27% of Australian beef exports. It is now owned by the worlds largest meat processor, JBS, a Brazilian company.

Have these or other change of ownership made the slightest difference to the operations of companies which have been purchased by overseas interests? No.

Foreign investors have paid high prices to acquire ownership of companies in the belief and expectation that they can manage them better, apply synergies and expertise and yield an acceptable return on their investment. They are entitled to realise those expectations.

As a result, most of the companies which have passed into foreign ownership have improved their performance, continued to serve farmers and provided new invigorated competition. More often than not, primary producers have benefitted from foreign investment. However this has meant that profits earned in Australia have been sent overseas, just as Australians investing overseas bring profits into Australia.

It has been argued that the Australian attitude towards foreign investment in land and primary industries is too liberal, even open slather and should be tightened. There are cases where this might be appropriate, particularly where the investor is a foreign government that may seek to act in a way which is not in our national interest.

However, it has to be said that at present, foreign investors are not permitted to operate other than in accordance with our laws and regulations. Regular inspections ensure they do.

The area of land purchased by foreign companies is a small fraction of the total land area suitable for primary production. Federal and State governments monitor proposed and actual land sales and investment in Australian companies.

Where any one investment exceeds $230m., FIRB is required to make a recommendation to government on whether the transaction would be in the national interest and the Minister then decides if it should proceed.

In the case of freehold land, particularly agricultural land, the $230m threshold could be reduced, possibly to $100m.

Public confidence that we are not selling off the farm could be further enhanced if the government was required to publish FIRB reports in full and not just their recommendations.

Mike Pope trained as an economist (Cambridge and UPNG) worked as a business planner (1966-2006), prepared and maintained business plan for the Olympic Coordinating Authority 1997-2000. He is now semi-retired with an interest in ways of ameliorating and dealing with climate change.