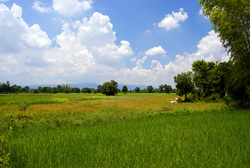 With a large amount of arable land and lots of rain, Thailand will attract foreign investors in farmland.

With the media flooded with political news, it is easy to overlook reports about European and American hedge funds purchasing large tracts of agricultural land in Africa recently.

Such purchases seem rather odd, as agricultural land - and in distant Africa at that - is more difficult to unload when compared to other types of assets that those funds usually acquire, such as stocks, currencies, commodities and precious metals.

In some respects, however, the purchases could be considered a further expansion of investment by those funds, as some have already purchased agricultural land in the United States as well as in South America.

Why they would do that is a matter of speculation, for hedge funds are privately owned and are lightly regulated; they need not make public the details of their operational activities.

Perhaps with the economic crisis spreading to more countries while recovery in others is slowing down, risks have further increased while opportunities for investment have narrowed, causing large sums of money to flow into, or being left in, the hedge funds, which need to put it somewhere.

From a long-term perspective, the return on investment in agricultural land should be quite high, both from the potential profits of growing crops and the continued rise in land prices. This is because the prices of food are projected to increase substantially as world population continues to grow, both agricultural land and fresh water availability shrink further, and the push to grow energy crops intensifies.

For these reasons, a number of sovereign funds and large companies are already involved in buying or renting land in low-income countries to grow food and energy crops.

Such land purchases, however, have created intense controversy. Proponents reason that the purchases will bring in additional investment which those countries badly need in order to raise land productivity and produce more income. But critics have charged that the process has pushed the poor off the land, for the benefit of the better-off in their societies, as well as for rich investors and foreign consumers. With little opportunity for other gainful employment, prospects for the poor become bleaker; some may even starve.

The issue is highly contentious; it has been cited as a major reason behind the putsch in Madagascar two years ago, as the government had agreed to lease millions of hectares of agricultural land to a foreign company, which would have pushed subsistent farmers off that land.

The movement towards acquiring agricultural land in low-income countries will intensify and Thailand will be of interest to investors, as it is well-endowed with good land, a lot of rain and largely uninterrupted, warm sunshine all year.

Strong opposition arose when foreign investors wishing to buy or lease large parcels of agricultural land showed up a few years ago. They have not given up, however, as there are persistent reports that they have been working through Thai nominees.

Since Thailand has no law against large land holdings and small land holders have shown a willingness to sell at high prices, foreign investors will succeed in acquiring large tracts.

With no land of their own and the inability to rent, small farmers will then flock to the cities to seek employment, as they have done for decades, adding to the ranks of the underemployed and thus aggravating economic and social problems.

This is the right time, therefore, to implement a land reform programme that will set a ceiling for land holdings by individuals and specify under what conditions large holdings can be acquired. At present, such a reform is not in the offing since political parties contesting the election are not keen to take up this important issue, as it will likely affect some of their members and supporters.

Hence, a decade or two down the road, we can expect to see large tracts of Thai agricultural land in the hands of hedge funds and other foreign entities, directly or through nominees - and it will be too late for Thais to do anything about it.