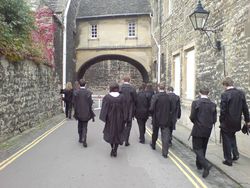 Real assets held by the Oxford University endowment include farmland.

Sandra Robertson, Chief Executive Officer of Oxford University Endowment Management, gave a rare glimpse of the nonprofit’s investment strategy at the National Association of Pension Funds Investment Conference in Edinburgh. “We take a holistic approach in managing the fund and when we consider investments in a particular country we look at all aspects and markets within the country,” she said.

OUEM targets global equity (45%) private equity (20%), non-directional assets (15%), real assets (16%) and cash (4%) to achieve a high level of diversification. Non-directional assets are short-term investments not correlated to other assets within the wider portfolio. They include distressed debt investments, which make up 7-8% of the whole portfolio. Real asset investments held by the fund include farmland and natural resources. Most of the investment is outsourced. Robertson did not name the asset management firms used by the company at present.

The company was formed in 2007 and is a Financial Services Authority-registered wholly-owned subsidiary of Oxford University. Its aim is to generate a portion of the University’s income through its investment activity. The capital is split into two funds—the Oxford Endowment Fund, which has long-term capital and a target return of 5% per annum, and the Oxford Capital Fund, which is a short term fund used for the university’s capital projects and has a target of LIBOR+.

The company does not handle investments for any other entity, although Robertson said they had been approached by other institutions to enquire about managing money on their behalf.