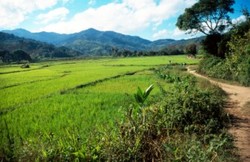 MANILA– There is a rising trend in the number of what are called foreign land deals in many countries across the globe, covering up to million hectares of land. The scale and rate at which these deals have taken place, plus the institutions involved in the transactions have made these deals controversial.

Foreign land deals refer to purchases or long-term leases or large tracts of productive lands in the poor countries by rich countries and their corporations, which need resources to produce crops either for food, feedstock, or biofuels in commercial and export quantities. These have been referred to as “land grabs” because of the usually unfair terms by which they have been transacted. While most of these deals pass through legal government channels, consultation with the communities of farmers and indigenous people is lacking.

The land rush, which began as early as 2006, is said to be not only due to the rush by “food insecure” nations to ensure food supply or the increasing demand for alternative sources of energy like biofuels, but also by market opportunities from speculation on land value.

Indeed in the face of an intensifying global crisis, land markets have become attractive as they present a new arena for speculation on land prices. According to Oxfam, there are around 120 hedge funds, retirement funds, agribusiness corporations and private equity funds investing in agricultural lands in poor countries. This shows that the land rush is only partly explained by the food and energy demands, and it becomes apparent that investment in soft commodities such as farmlands is about profitability.

According to non-government organization GRAIN, the Philippines is among the leading target countries for land deals, with others like Sudan, Pakistan, Ethiopia, Tanzania, etc. This is despite provisions in the Philippine Constitution barring foreigners from owning land in the country.

But aside from the “food-insecure” nations, another group of land grabbers are the investment houses, private equity funds, fund managers, and large agribusiness corporations. They enter the picture either through local private partners, the host governments, or through their own governments seeking joint ventures with the taget countries. One example of this disguised group of land grabbers is the Japanese firm Mitsui, which bought 100,000 hectares of land in Brazil for soybean production. This land grabbing is in the form of acquisition of farmlands, where Japanese and Arab trading and processing corporations are involved.

The third group of land grabbers is the host governments. They change national laws, policies, as well as practices on land ownership to accommodate the foreign acquisitions. For instance, the Sudan government, which owns most of the country’s land, is issuing leases at cheap prices. Meanwhile the Chinese government introduced rights leasing or trading to farmers.

Other governments that are reluctant to open up and allow foreigners to take over their lands will have to deal with the World Bank. In 2009, World Bank loans, grants, equity investments, and guarantees increased by a record 54% from the previous year, and most of the increases are directed to facilitating foreign land deals.

After centuries of colonial land grabs and decades of failed land reforms and globalization, the country is actually set for this new brand of foreign land grabbing.

The Philippine Agribusiness Development Cooperation Center (PADCC), created in 2007 keeps a land bank of supposedly idle lands that may be considered for agribusiness deals. It facilitated a US$300-million worth of investments from the NEH of Bahrain and the local AMA group to establish a banana export project in Davao del Norte.

On the other hand, the Philippine government under former President Gloria Arroyo entered 18 deals with China, letting Chinese companies access 1.24 million hectares of land. These deals, which became controversial together with the NBN-ZTE deal, have already been cancelled.

The Philippine government is also waiting for the follow-up visits from Saudi Arabia to finalize the US$238.6 million fresh investments for cash crop plantations like banana, mango and pineapple, as well as aquaculture and halal food processing. The two governments have actually been discussing the possibility of Saudi food production in Mindanao and other parts of the Philippines for a lease of 50 years or so.

Meanwhile, China has reportedly secured control of over 2 million hectares of foreign agricultural lands from countries including the Philippines, Brazil, Kazakhstan, Laos, etc. There is also a plan by the Republic of Korea of investing in corn plantation in the Philippines involving a large agricultural area.

Moreover, the Philippine government has allocated six million hectares of ‘idle lands’ for the production of sugarcane, coconut, cassava, jathropa, oil palm, etc. It has also allocated two million hectares for agribusiness development. All these are even bigger than the size of the country’s current cereals farms.

One of the promised benefits of farmland investments is affordable food for all. But land deals are happening in two unrelated markets—the products market and the land market, with the latter operating on too much speculation. With this, the prices of food will continue to be affected not by the supply-demand equations and production ratios but only with the amount of capital invested in the commodity exchanges. In fact, the steep increases in rice prices in 2008 were largely due to the activities of financial investors in the commodity exchanges.

Also, allowing foreigners to own land for food production will not ensure stable food prices because the produce will eventually be exported back to the source countries at the prevailing global market prices. This will benefit agribusiness corporations and their governments tremendously by increased profits from utilizing cheap land and labor in the host countries and reselling at speculation-driven prices.

Moreover, the marginalization and displacement of farming communities from their land will undermine further their capacity to buy food. In the end, because of the foreign land deals, communities immediately lose their rights to be consulted and participate in food distribution programs. Host governments will also lose further the chance to build stocks, implement centralized procurement and develop local markets.

The entry of corporate control in agricultural and food production will eventually destroy small-scale and backyard farming. The small farms, as well as the national capacity to produce its own food, are bound to lose in the foreign land deals by allowing foreign corporations and investors to produce food while the local market relies on imports. Thus in the end, host countries have essentially given up their right to be self-reliant and self-sufficient in food production as well as their economic democracy to determine the sustainable use of their seeds, genetic resources, water resources, livestock and other natural resources.

Lastly, host governments may be held accountable not only for the lack of transparency in transacting foreign land deals and violating the rights of communities, but for surrendering sovereignty to pursue food security and national development. (http://bulatlat.com)

Farmers May Lose Control of 1.2 Million Farmlands under RP-China Deals