Invest in Africa for the long-term, says Sime Darby Plantations 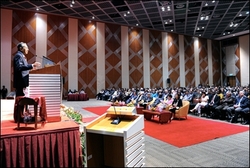 PUTRAJAYA, June 18 (Bernama) -- Companies and entrepreneurs venturing into Africa must not only invest for the long-term but also give priority to corporate social responsibilities, says a Sime Darby Plantation Sdn Bhd official.

Sime Darby which has operations in Liberia, turning degraded and abandoned area into plantations, has also invested in infrastructure.

"We're like a mini UN (United Nation) there. We provide schools, buses, develop settlements and proper housing for the community. It's the legacy of war and we must deal with that," he said.

Helmy also said perception that Africa was not a safe place was unfounded.

"Most African countries have been peaceful the past 20 to 30 years. There is stability. Sometimes, we form opinions based on news but it's not really the case," he said, adding that the general public was tired of wars and conflicts.

Helmy said the African continent was an unpolished gem with vast unused land.

"It is also an untapped market with abundant resources but you must have a bit of appetite for risk and understand the local culture of doing business," he said, adding that even the Chinese have substantial interest in Africa now.

"The way they are operating is very impressive, especially, when they first came in five to seven years ago, they neither spoke English nor French, now they are everywhere," he said.