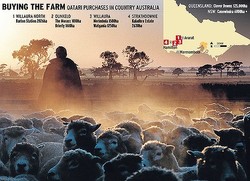 Buying the farm. Where Qatar are buying.

A LARGE investment in prime Western District farmland by the Qatar government is increasing pressure for a toughening of Australia's foreign ownership rules.

Amid growing disquiet in the bush over the loss of national sovereignty, the Greens and independent senator Nick Xenophon have called for changes requiring the Treasurer to approve all foreign acquisitions of rural land above $5 million.

Assistant Treasurer Bill Shorten said he was aware of angst in some rural communities but said the Gillard government wanted to examine the scale of foreign ownership in Australia before deciding if reform was necessary.

''Once we have all the facts on the table we can then consider in detail further policy responses,'' Mr Shorten said.

Qatar-based Hassad Foods, which is the agricultural arm of the Qatar government, recently agreed to pay about $35 million for more than 8ooo hectares of sheep-grazing and cropping land in Victoria's Western District.

The secretive deal includes five homesteads around Willaura and Dunkeld, near Ararat, and is believed to be one of the largest acquisitions of Victorian pastoral land in recent history.

Local stock and station agents estimate the Qatar government paid a premium of up to 20 per cent in order to secure the controversial deal, which involved three properties owned by local families and two - Merrimbula and Brierly homesteads - owned by the US-based Westchester Group.

With food security looming as one of the biggest global issues of the 21st century and local communities increasingly weary of foreign raids on family farms, Australia's open-door policy is now under scrutiny. 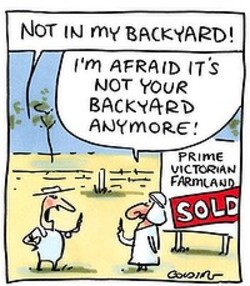 Unlike other countries including New Zealand, Australian governments do not scrutinise or monitor overseas acquisitions and ownership of agricultural land.

As government-backed and private companies from the Middle East, China and the US continue to buy into Australian agriculture, politicians are grappling with how to respond without stymying foreign investment or damaging trade relations.

The minority government has provided an opportunity for an unlikely alliance that includes Senator Xenophon, the Greens and Coalition stalwart Bill Heffernan to pursue tough new measures.

Senator Xenophon, with the backing of the Greens, also wants a national interest test to apply to agricultural land purchases. The Senate committee examining Senator Xenophon's proposal has deferred a decision until research agencies, including the Australian Bureau of Statistics, have compiled a basic snapshot of foreign ownership.

But The Sunday Age believes the government remains unconvinced that present levels of foreign ownership pose a threat to food security. A government insider also expressed concern that protests tended to be more vitriolic when Chinese or Middle Eastern interests were involved, while British, Canadian or US investments were often unchallenged. But Senator Xenophon dismissed suggestions the issue was driven by misguided nationalism or xenophobia. ''This is not about banning foreign investment, it's about having appropriate scrutiny and monitoring.

One of the world's richest nations on a per capita basis, Qatar has only about 65,000 hectares of arable land. The recent deal by Hassad Foods in Victoria's Western District follows its purchase last year of the 2630-hectare Kaladbro Estate, about 330 kilometres west of Melbourne.

A spokesman for Hassad Foods Australia declined to comment.

Ararat Shire mayor Andrea Marian called on all levels of government to establish new guidelines for foreign acquisitions and the introduction of a national mapping system to monitor ownership.

''This buy-up of land has happened so quickly it's almost too late. One after another, after another and the next thing you know half your region doesn't belong to you.''

''If this continues throughout the Western District it will dramatically change the structure of our rural communities. We can't allow open slather on our land; surely there have to be some guidelines,'' Mr Mckenzie said.

Greens deputy leader Christine Milne said foreign demand for Australian farmland had increased in the wake of an international food shortage that accompanied the global financial crisis in 2008.

She said countries highly dependent on food imports, including Qatar, Saudia Arabia and China, had developed strategies to ''ensure their own people had access to food in case of a food crisis''.

''I think Australia has a huge responsibility to protect its land and maximise food production, not only for our own consumption but to actually make it available for international markets,'' Senator Milne said.

Although reluctant to support a clampdown on foreign investment or ownership, he conceded the introduction of tougher rules on foreign ownership was likely.

But he urged caution to avoid spooking foreign investors and favoured the introduction of conditions for investment rather than thresholds for review.

He said foreign investment in halal abattoir and processing plants could be a condition required for overseas investment in the cattle farming industry.