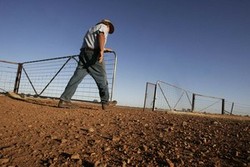 The mad scramble for Africa. Critics say the financial firms that helped cause the global recession by inflating the real estate bubble -- are back. And this time they're being accused of pulling the same tricks with the world's food supply. Hedge funds are buying up African farms -- but critics say -- they're not planting much food. We look into what may be behind an alleged African land grab?

Part Three of The Current

Oxfam predicts food prices are going to jump as much as 180 per cent over the coming decades. And that's on top of spikes that have already pushed nearly 150 million people into poverty.

As well, there will be a lot more people to feed as the world's population grows.
It's a warning -- but it's also an opportunity. A rush of investors is buying up farmland, especially in Africa. Many African governments see these investments as a chance to modernize farming, increase food production and employ locals.

The buyers are often US and European-based hedge funds who specialize in agri-business. A year-long investigation into these investments by the Oakland Institute -- a think tank in California -- has uncovered a long list of deals that it says have little accountability, pose serious threats to food security, and do little to improve local employment opportunities.

Anuradha Mittal is the Executive Director of the Oakland Institute and we reached her in Oakland, California.

One of the companies mentioned in the Oakland Institute report is Emergent Asset Management. It's invested extensively in African agricultural land. Susan Payne is a Canadian and CEO of Emergent, and we reached her at her office in London, England.

Johannes Myburgh is a Correspondent for the wire service Agence France Press in Mozambique. He's been following the local reaction to these new land investments . He was in Maputo, Mozambique.