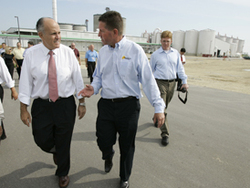 Bruce Rastetter, CEO of Pharos Ag and co-founder of AgriSol Energy, pictured with former New York City mayor and potential Republican candidate for the 2012 presidential election Rudy Giuliani. The Oakland Institute says that Rastetter's company AgriSol is in the process of acquiring 325,000 hectares of land in Tanzania populated by Burundian refugees who have been farming the land since 1972. (Photo: AP)

By Carey Gillam and Richard Valdmanis

KANSAS CITY, Mo. and DAKAR, June 8 (Reuters) - Wealthy U.S. and European investors are accumulating large swaths of African agricultural lands in deals that have little accountability and give them greater control over food supply for the world's poor, according to a report released Wednesday.

Along with hedge funds and speculators, some U.S. public universities and pension funds are among those in on the land rush, eyeing returns of 20 to as much as 40 percent, according to the report by Oakland Institute, a think tank in California.

While investors find rewards in the arable African soils, some of the deals displace local residents in poor African communities, the report charged.

A large share of land deals are aimed at biofuel production, taking away land from food production. And some deals shield investors from accountability even as they acquire precious land for next to nothing, the report alleged.

With funding from such foundations as the Howard G. Buffett Foundation, Oakland Institute researchers spent more than a year working undercover to gather information on land investment deals in seven African countries such as Ethiopia, Mali, Mozambique, Sierra Leone, Sudan, Tanzania and Zambia.

Institute officials said they are not opposed to agricultural investments in Africa, which they agree are needed to increase food production.

But they hope that by exposing negative aspects of certain deals, they can curb "blind support" for expanded industrial agriculture on the continent.

They said there are lax or no job creation requirements for many of these investments, land costs are cheap or, at least in one cited example, free. Water rights are granted broadly, and many foreign investors are not required to honor labor and environmental rights.

"Investment in agriculture is very important, but the question is what kind of investment," said Mittal.

FROM IOWA TO AFRICA

World economic and agricultural leaders have projected the world's population will surpass 9 billion by 2050 and global food production must jump 70 percent or more to meet demand.

Such dire warnings have sparked a rush by investors to buy up farmland around the world. Investing in African agriculture particularly has been encouraged in many cases by African governments and organizations eager for help in modernizing farming to raise crop yields that severely lag those of the more developed parts of the world.

The Malian Investment Promotion Agency (API), for instance, touts investor access to land and the ability to easily transfer profits out of the country, the report alleged.

In Ethiopia, government incentives include income tax holidays and a government "land bank" through which foreign investors can acquire large contiguous blocks of land, according to the report.

With such incentives, the pace of land acquisitions in Africa is staggering. In 2009 alone nearly 60 million hectares was purchased or leased in comparison, the report stated.

AgriSol has publicly described its plans for a large-scale commercial farming and beef and poultry production on three tracts of land in western Tanzania, with a demonstration project ready by late this year.

AgriSol works with a Tanzanian investments and consulting firm to circumvent limits on foreign land ownership, according to the Oakland Institute report.

The group has said publicly that it intends to work cooperatively with local farmers.

But the Oakland Institute said that much of the 325,000 hectares the group is taking control of is populated by Burundian refugees who have been farming the land since 1972. Those people are being forced to leave the land and white South African farm managers are to be brought in, the Institute said it found.

The Tanzanian government had been undertaking a naturalization process to grant citizenship to the more than 160,000 refugees. But with the AgriSol deal, the government has been coercing refugees to evacuate the land in question if they want citizenship, according to the according to the Institute report, which does not make clear whether AgriSol is aware of the relocation efforts or not.

Rastetter did not respond to interview requests.

In many cases, the land comes cheap. In the west African country of Mali, one investment group was able to secure 100,000 hectares of fertile land for a 50-year term for free, according to the Institute's report. Elsewhere $2 a hectare is the going rate.

"There's an extreme lack of transparency surrounding the land deals in Africa," said Frederic Mousseau, policy director at Oakland Institute. "International investors who are involved in these deals are not accountable to anyone."