How the land lies

Agricultural land is once again attracting global investors. But the sector is far from risk free, says Andrew Shirley

The arguments for investing in farmland seem compelling. Food and soft commodity prices have hit record highs (see graph, below). The OECD estimates that food production will need to increase by 70% before 2050 to satisfy global population growth and changing consumption trends. 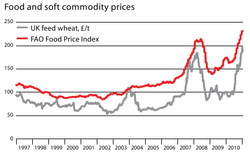 The increasing use of crops for biofuel production – around 40% of the US maize crop, some 14m hectares, will be used to produce ethanol this year – as well as soil degradation and urbanisation, is putting pressure on land for food production.

Anybody who bought land in England at the beginning of the century has seen their investment almost treble in value, driven by a shortage of supply and keen demand from farmers, investors and lifestyle buyers. During 2010 alone, values rose by 13%, according to the Knight Frank Farmland Index. But high capital values mean annual operating yields of under 2% are standard. Many long-term investors view this as an acceptable trade- off given the security of the asset, availability of quality management and potential capital appreciation, but the lack of land on sale makes it hard to amass a portfolio of any size.

Funds and investors with tens, if not hundreds of millions of dollars to spend, need to look to areas of the world where vast swathes of land are for sale or lease. Often, however, these are the areas with the greatest risk attached. Russia and Ukraine, for example, possess some of the world’s most fertile soils, hundreds of thousands of hectares of which are currently under-utilised, but both countries are considered to have high levels of political and operational risk. Acquiring the freehold of land is complex in Russia and impossible in Ukraine where there is a moratorium on land ownership. But the opportunity to acquire land cheaply combined with the operating returns available, will outweigh the risks for some investors.

“We are starting to see some renewed interest from institutions, pension funds and family offices that are looking at a buy-and-hold strategy with annual returns of 15-18% before any capital appreciation,” says Adam Oliver of property consultant Brown & Co’s Poland office.

He admits that farming in Ukraine is “about as tough as it gets”, but argues that the ability to acquire five- to 10-year lease rights for just $150/ha means the land is inherently significantly undervalued. “In Russia and Ukraine, there is a serious mispricing of risk in the market at the moment,” he says. “In Brazil, where recent events surrounding foreign land ownership legislation have also demonstrated country risk, values are $4,000 to $8,000/ha for similar quality land.”

There is speculation that Ukraine’s moratorium on land ownership will be lifted, but factoring this into investment plans could be unwise. “I am sceptical,” says Mr Oliver.

Russia has phenomenal potential, but is for investors who understand the country and its risks. “In many ways, selecting where to invest is the easy part,” confirms Richard Warburton of Investment AB Kinnevik, a listed Swedish investment house that has farming investments in Russia through its shareholding in Black Earth Farming, as well as Ukraine and Poland. “The real challenge facing investors is getting the operations to work properly and this is where our focus is right now.”

Central-Eastern Europe provides a good combination of risk and return. Poland and Romania are of particular interest due to their high-quality land and good logistics, says Mr Warburton. “Both are within the EU and benefit not just from the underlying sector fundamentals, but also a convergence play. Farmland values are still well below those of Western Europe.”

South America also offers farming on a massive scale and remains a preferred target for many investors because of its productive climate and soils, but values in more popular areas have started to climb. The spectre of farmland nationalisation, as seen in Venezuela, also worries some investors.

Argentinean farmland in the central provinces around Buenos Aires is now fully priced at $5,000 to $10,000/ha. Charles Whittaker of Brown & Co says new investors and existing operators are looking further north to provinces such as Chaco and Formosa where land under production is priced from $1,200 to $2,500/ha. Uncleared land is available for upwards of $200-$300/ha.

Argentina does levy large export taxes on most agricultural commodities and has a reputation for political instability, but most investment models factor in the taxes and returns of 10% can be achieved on the right land, according to Mr Whittaker. “Given that we can double crop on at least half the holding in most locations, all operating costs can be sub £100/ha. Ownership is clear and foreign ownership of freehold land is welcomed.”

Foreign investment into Brazilian farmland, of which an estimated 100m hectares remains to be opened up, has largely stalled. This follows a recent government move that could see land purchases by overseas buyers capped to around 5,000 hectares. “Until the middle of last year, there had been a lot of interest,” says Stuart Donald, managing partner of AgriFrontiers, which advises on agribusiness investments in Brazil.

But the restrictions will have a limited effect on land values, says Mr Donald. This is because most sales in the country are to Brazilian farming companies or investors. Prices also tend to be more influenced by the market for soft commodities such as soya beans. Given the benefits of overseas investment, he expects the restrictions will probably be reviewed to differentiate private investors who will develop the land from speculators and sovereign funds.

Renato Cavalini, managing partner of Brookfield Brazil, part of Ontario-based Brookfield Asset Management, which has just closed its $330m Brazilian Agriland Fund, agrees. He believes the government is responding to unfounded public fears that sovereign wealth funds could operate huge areas of farmland “under their own rules”, repeating what they are doing in Africa.

Overseas investors, who spent $2.4bn on farmland between 2002 and 2008, according to 40% of the US maize crop, equivalent to 14m hectares, will be used for ethanol production this year Brazil’s central bank, have so far concentrated on the regions around Sao Paulo and the farming frontier states of Mato Grosso and Bahia. Some are now moving into less developed areas such as Piaui and Maranhao where land values are cheaper and infrastructure is improving, according to Mr Donald.

Africa polarises investors. For many the political risk is simply too great with every nation viewed as a potential Zimbabwe. To others, parts of the continent represent an agricultural Xanadu.

Zambia, for example, has huge potential. Harmony Chiboola of Knight Frank Zambia says increasing investment by individuals and funds in established farming areas has led to a shortage of commercial farms to buy and a hike in values.

Critics of foreign land ownership in Africa, especially deals where most of the crops are shipped back to the investing nation, call it a new form of colonialism of little benefit to hungry populations. The political upheaval in Tunisia was partly driven by the rising cost of food.

Indeed, Stephen Johnston of Canadian fund manager Agcapita prefers to keep his investors’ capital closer to home. “We could have gone anywhere,” he says. “But I don’t think you can make a long-term case for investing in developing countries. Poor people vote and politicians listen. At some point, somebody will get elected who will nationalise farmland.” 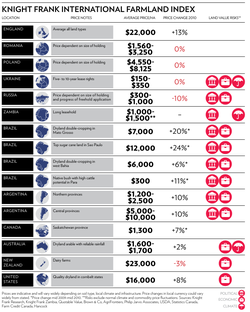 Canada is unique because it offers farmland at emerging-economy prices without the risks, says Mr Johnston. Farmland in Saskatchewan, one of the country’s three prairie provinces, is available for under $1,300/ha. This makes grain grown there some of the cheapest in the world to produce.

However, land values are so low because tight ownership restrictions make it complicated for those from overseas to invest in the province.

In the US, land values rose by as much as 16% last year on the back of increased commodity prices and rents. But some of the biggest agricultural states, such as Iowa, restrict farmland ownership by investors and corporations. This does not mean investors have to sacrifice double-digit returns, according to Jeffrey Conrad, president of Hancock Agricultural Investment Group, which is the largest institutional owner of US farmland and also has interests in Canada and Australia.

Careful selection of assets across a diversified range of crop types – Hancock is a leading producer of nuts and cranberries – has enabled the group to deliver 15-year annualised total returns of 11.5% for row crops and 14% for permanent crops, says Mr Conrad. Clients, such as pension funds, do not buy into pooled funds, but have portfolios tailor-made for them to match their investment objectives, he adds.

Australian farmland is attractive to investors because it combines the benefits of first-world governance and stability with the scale and prices of developing nations. Ownership is also not restricted. “I think land here is fundamentally undervalued,” says Australia-based Philip Jarvis who advises foreign investors, including sovereign wealth funds worried about food security.

As a major exporter of agricultural commodities, profitability can, however, be affected by market and exchange rate volatility. The recent strength of the Australian dollar combined with comparatively high interest rates has, for example, contributed to a flattening in land value growth, which was running at plus 10% per annum prior to 2010.

Mr Jarvis, however, expects overseas interest to pick up again. “There is a growing desire to spread risk,” he says. “There is an inverse weather correlation between Australia and South America. When we have the rain of La Nina, they have the drought of El Nino. They’re a good hedge against each other.”

The value of New Zealand farmland is even more closely related to global markets, particularly the dairy farm sector, with 90% of the country’s milk output going for export. Weak international prices hit demand for dairy farms in 2009 and 2010, but this trend could be reversed if the recent strengthening of global commodity markets is maintained, says Sarah Davidson, a research analyst at property firm Bayleys.

The growing demand from overseas for land – one of China’s richest men is currently trying to buy a portfolio of 16 dairy farms – has prompted the NZ government to recently introduce new measures that will allow it to veto foreign acquisitions it thinks are not in the national interest. But, Ms Davidson says, it is unlikely that these changes will have a significant impact upon the rural market as the majority of farm sales fall well outside the new criteria set by the government.

Despite this, the fact that a politically and economically stable first-world country such as New Zealand is concerned, highlights how controversial overseas investment in farmland can be. The investment rationale is indeed compelling, but the very factors that make it so will ensure that the controversy is unlikely to abate any time soon.